Behind the Scene: Women with Instruments

This is a call to arms. Women – your guitar, djembe, viola, vocal cords, these are your weapons. 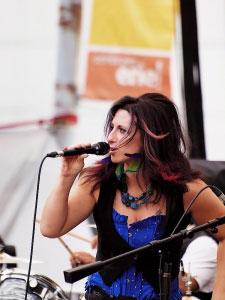 Who's that woman behind the curtain? From judgment calls to anatomical inadequacies, the females of Erie' scene redefine what it is to be a musician in today's industry. Over the next few issues, let's stick around the venue after the stagelights go down and have a chat with some of the most remarkably determined people in our local music scene. The women.

This is a call to arms. Women – your guitar, djembe, viola, vocal cords, these are your weapons.

Now grab your balls and get on the stage.

Easier said than done when you have a trunk full of gear, heading to a gig, wondering how many people will be eyeballing you while you screw up that riff you've been working on all week.

But, when I'm faced with just such a situation, I hear the words of Kristen Schrum, lead vocalist for Kristen And The Cosmonauts. "Stop apologizing," her voice chimes as clear as the day we sipped Yuengling at Calamaris and tried to answer what we thought were a couple, simple questions: Who are these women and where are they?

Female musicians remain desperately underrepresented in the industry, on both the local and global levels. Hell, working women in the United States hit all-time highs in the 1980s. The same decade the Equal Rights Amendment failed. The same decade I was born. And since the new millennium, those numbers have decreased.

"Overall, women now are at a critical point," says Katie Chriest of The Heliotropes. "They could continue to be as much at fault if they buy into [the stereotype] and allow it to continue to happen."

The solution is simple: pick up the instrument.

I was inspired by an 11-year-old girl to play guitar. At the Chimera Soiree back in 2008, Eva Yochim and I found ourselves a corner and talked shop, while her father, John Yochim, loaded gear in true, blue-collar musician form. And when Pegasus Unicorn finally took the stage, I turned to her and sighed, "I wish I could play guitar like that. But I'm too old to learn now."

She told me, simply, her dad started playing when he was 19. And that, simply, changed everything.
Six months after I started lessons with him, I played my first gig.

The women making noise in the scene come from all backgrounds with all levels of experience, from a few months to many years. Gina Rullo, mainstay female musician of such bands as The Telephonics and, now, Planet Claire, dove into the bass guitar with little more than passion on her side.

"I didn't know how to play bass, but I told [The Killerinas] I did," Rullo giggled. "So, the first practice I played the whole thing facing my amp. They kept asking me if everything was okay. But […] I knew I would figure it out because they were really fun girls and I loved making music."

That passion ignites the spark. It creates the courage to be onstage, in front of people, sharing an intimacy only known through harmony. And when I'm up there, I'm thinking of Schrum.

"I learned to grab my proverbial music balls," she laughed, reaching under the table with both hands cupped to better illustrate just how big they truly were, "and start owning that stage and owning myself as a woman and a person. As someone who's been through some pain and heartache and needs to express it."

We need not be the great women behind the men, or behind the scenes. It boils down to what we are "supposed" to be doing. The tenants come from our history, our society, our peers and even ourselves. Let's reinvent them.

Because it's not about testicles, or any other anatomical part. It's about strength.

As for the hours of dedicated practice, putting up with the naysayers and haters, and accepting encouragement from the people who actually matter, we've got your back in the coming issues.