Best of Enemies Explores the Partisan Bickering of a Bygone Era 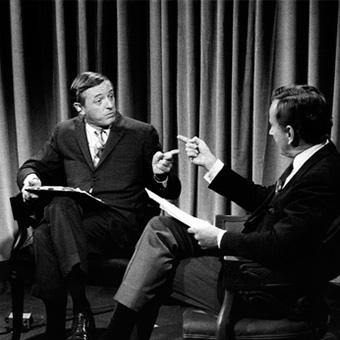 Watching liberal novelist Gore Vidal spar with conservative journalist William F. Buckley in the late sixties is like entering the Twilight Zone. In tone, appearance, and rhetoric, the two call to mind almost nothing about contemporary politics. In fact, the presidential failures of aristocratic insiders like Mitt Romney or John Kerry rely, in part, on their lingering resemblance to patrician elitists of this sort.

Although Buckley and Vidal were political opposites, their personal similarities take center stage in Morgan Neville and Robert Gordon's 2015 documentary Best of Enemies. Both are petty, adversarial, impeccably dressed, and fiercely intellectual. Both sound strikingly similar to Thurston Howell III from Gilligan's Island. And for a few months during the summer of 1968, their public sparring (especially over Vietnam, sexuality, and police brutality) propelled ABC studios into the media spotlight.

Best of Enemies would have you believe that these debates signaled a sea change in our political discourse, as partisan bickering came to replace objective facts and figures. The documentary also identifies Buckley as an important precursor to the "Reagan revolution" that rolled back the accomplishments of the New Deal. Beyond that, I'm not sure that Vidal and Buckley indicate much about American politics in the 21st century. Vidal's sexual frankness is more Oscar Wilde than Nicki Minaj, and it's tough to picture Buckley making any sense out of a Republican party enthralled by reality television stars and low-affect lunatics who think that Jesus' dad stored grain in the pyramids of Egypt.

Ironically, Best of Enemies indicates the degree to which anti-intellectualism has taken over political discourse in our country. At its best, this impulse can minimize the reign of rich white guys in seersucker suits. At its worst, we get pointless debates about "killing baby Hitler" when we need insights about foreign policy. I'm not sure Best of Enemies steers us in a more productive direction, but it gives us a look at another flawed model for political discourse. – Dan Schank