Betty Machete and the Angry Cougars Pounce at Scotty's

by Nick Warren
View ProfileTwitterInstagramRSS Feed
January 16, 2019 at 10:30 AM 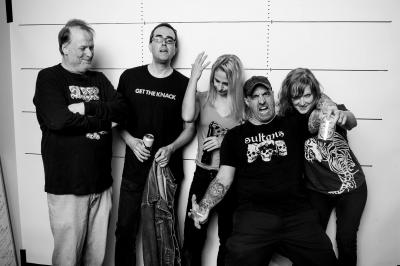 Like the animal they take their name from, Betty Machete and the Angry Cougars are a vicious beast. A massive onslaught of buzzsaw force, the Columbus quintet is fronted by singer Linda Flowers Dull, bringing a fully-escalated, high-octane performance. This is the kind of punk rock energy perfectly at home at Scotty's Martini Lounge, an unexpected juxtaposition of well-crafted drinks, permitted smoking, and a do-it-yourself ethos. Joining the Cougars (as they did for their last appearance in town) will be local heroes Detroit Red and Maniacal Device. Detroit Red consists of singer/guitarist Erik Nielsen, drummer Erik Mildner, and bassist Josh Gone, playing their own unique spin of rock 'n' roll, alternative, and garage. Like the Cougars, Erie quintet Maniacal Device are not known for their subtlety or their manners, but will surely bring a captivating set thanks in no small part to the charisma of frontman "Morbid" Rob Burke. Fans of music both hard and fast will surely find a home downtown for a night of original tunes. — Nick Warren