Beyond the Surf: Putting in the Work

With a blues mentality and a working man's schedule, Toby Keller finds some motivation to stay music-minded. 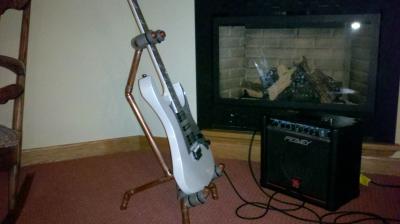 The Ray sits in the corner of my room like he's waiting to be released from a fishing net; perched on the  new copper stand that my father and I built, it looks neglected and lonely. I try to avoid its judgmental stare. I haven't been paying much attention to him lately. It seems that priorities get shifted somehow and work becomes all-consuming and important. The Ray can't stand it—he just wants to play. I feel the same, for that matter, so I try to stay music-minded as much as possible.

I do my best to get my hands picking and working down the fret board for an hour a day. Some days that just can't happen. It saddens me to know that somewhere, somebody is getting better, learning a new song, furthering his musical domain while I deflect glares from my guitar as I hang up work clothes. But I'm trying—when I'm not playing, I'm constantly listening. Music is a love that doesn't die. As Keith Richards explained it:

Didn't matter if it was out of tune, there were notes happening, there were rhythms and harmonies, and they would start zooming around in my ears. It was very like a drug. In fact a far bigger drug than smack. I could kick smack; I couldn't kick music. One note leads to another, and you never know quite what's going to come next, and you don't want to. It's like walking on a beautiful tightrope.

In my first blog, I talked about the music that follows me through the day, a never-ending Pandora station of my accumulated favorites and some radio-randoms. Now, as I've begun playing those notes myself, practicing licks that I had no idea how to create, music is a whole new experience. The sounds are the same, I know they have to be the same because my iPod hasn't been updated in a while, but there is something strange to those familiar tunes. I listen differently.

There is something beautiful in learning from listening, and it's a lost art. In the Age of Technology, it is simple to go online and look at your favorite song's tabs —musical notations that guide the fingers on the fret board rather than the trained ear to pitches. Usually, somebody else has already figured out how the song is played and has mapped it out for you to learn. Although I like to learn quickly and easily, as far as I can figure, doing the extra work pays off. You gain an exponential amount more from figuring a song out through sound.

I think Keith Richards defined a generation that is slowly dying out, one that is being replaced by musicians who have the answers on a screen instead of in their soul, when he wrote: "I've learned everything I know off records. Being able to replay something immediately without all that terrible structure of written music, the prison of those bars, those five lines. Being able to hear recorded music freed up loads of musicians that couldn't necessarily afford to learn to read or write music, like me… and of course that breeds another totally different kind of musician, in a generation. I don't need this paper. I'm going to play it straight for the ear, straight from here, straight from the heart to the fingers. Nobody has to turn the pages."

Now, when I get fed up with giving over my hours to earning wages and sit down with the Ray, I listen as much as I play. As I work the fret board, as I role over the few chords and riffs I know, I commit their sound to memory. Even as I'm listening to songs throughout the day, in my mind my hands are around the Ray feeling for those notes, bending the strings to match what I hear.

By no standards is that revolutionary. Jimi Hendrix is revered for his story: a man who couldn't read music and learned to play left-handed on a right-handed guitar. But there are others. Jimi Page taught himself to play by listening to records.

Joe Bonamassa, an artist that I've been stuck on lately (for good reason), talks about his musical beginnings in Live from Albert Hall:

I remember so clearly, watching everything that Eric Clapton played and going, 'I don't know what that is but that's really cool.' I asked my parents for a guitar and I would sit in my room for hours and hours and hours. My parents would have to kick me out: 'go outside, play basketball, ride a bike, do something, get some exercise.' Because I would just be fixated on trying to recreate the sound.

As Steven Wilson of Porcupine Tree wrote, "In sound escape is found." From work, from the hassles of life, music can offer a beautiful escape better than any drug. However, that sound holds a lot more—it can be the key to unlocking a world of creativity, emotion, intelligence, and skill. So now, when I'm away from the Ray, I feel better if I can at least put on a record and imagine where my fingers would need to be on the Ray to mimic that sound. You can always be learning and practicing. Maybe someday it will lead to the Albert Hall, but nothing quite compares to just sitting down and playing.

Toby Keller can be reached at tkeller@eriereader.com.
Previous entries and other work of his can be found here.