Big Art from a Big Guy

Brad Ford's Of Rag-dolls and Rocket-ships is current on display at Urraro Gallery. 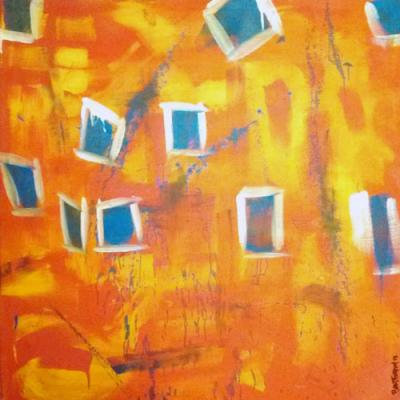 Go out to an art happening in Erie – a play, a concert, a gallery opening – and you will see him. He's big – as in NFL lineman big. So big he has his own satellites.

Two little girls constantly orbiting him, his daughters and their boundless energy bring silliness and a unique youthful spark to events that in any other city are usually reserved for adults. Since the girls have been coming to art openings and theater events, other showgoers with little ones often feel free now to bring their kids to snooty wine and cheese receptions. It's wacky, winsome even, to have four or five giggling moppets zipping around your legs while you are involved in a pretentious discussion about James Joyce with a college professor and listening to a jazz trio.

When you see Brad Ford's paintings you understand just how impish he is. His demeanor is usually pretty serious, but the paintings currently hanging on the walls of the Urraro Gallery could have only been done by the owner of a playful and goofy soul, and it's not surprising to find out that Brad once self-published a cartoon titled Scatterbrained Rabbit in La-La Land.

Everywhere you look around the gallery, the colors are bold and bright. There are paintings of robots with patchwork hearts, black tentacles spinning and oozing around in a sea of purple, and dolls with button eyes – all abiding underneath a flaming Styrofoam eye of Mordor that hangs up amongst the support beams in the ceiling. And while the mobile was almost too high up for me to notice it, I'm betting Brad has bumped his head on it a few times.

The only painting that offended my design sensibilities was one of the larger pieces on the wall (which is saying something since most of the work is at least three feet to a side). This painting, titled Star Splattered Banner, features a huge eagle silhouetted against a drizzled background of latex house paint. It looks like Jackson Pollock was held hostage by some Austrian noblemen and forced to paint for them. But there is, apparently, no accounting for taste, since someone has already purchased the work (presumably an expressionistic fan of Emperor Franz Josef).

These paintings have 21st century postmodernism written all over them – specifically the Kitsch Movement.  Kitsch is all about embracing everything that is possible in art. That means that a painting done in a cartoon style does not have to be an ironic statement "about cartoons," or a rebellion against commercial culture – it can just be what it is. The boundaries between what is "high art" and "low art" are broken, and Kitsch painting can be whatever the artist wants it to be and whatever the viewer wants it to be.

And in this case, that means painting can be fun.

Brad obviously is painting simply for the joy of creating. Rarely taking his work too seriously, he used thick cotton duck drop cloths as canvas and lets anyone, including his little girls, who wandered into his studio slap some oil paint onto his backgrounds. The results are truly spontaneous and gestural. They could only be successful if engineered by an artist with a trained eye and a practiced hand.

But Brad is used to working large. He created many sets for the Roadhouse Theater in its heyday and a couple of years ago ran the "Sling Paint" event at CelebrateErie where anyone could have a go at just slapping paint around for the fun of it. And an anything-goes, experimental, fun attitude towards art is what makes 21st century painting in America innovative.

Unlike the stuffy and serious fine artists that inhabited the second half of the twentieth century, Brad has given himself permission to make mistakes and look for breakthroughs as he works. He obviously has fun making art, and as a result, we get to have fun looking at it.

But as fun as this is, as big as Brad is, and as big of a show as Of Rag-dolls and Rocket-ships is, it won't occupy a large amount time. So if you're a fan of gestural painting, tattoo design, cartoons and comics, or bright and radiant color, get to Urraro Gallery at 135 W. 14th St. before the exhibit comes down Jan. 4 to see art that is wacky and winsome – even when there aren't two little girls running your legs as they orbit a big force in the Erie Art scene.

Urraro Gallery is open Tuesdays through Fridays from 10 a.m. to 6 p.m. and Mondays and Saturdays from noon to 5 p.m.