The Kings Rook Club's recently-opened downstairs will be packed with local favorites. 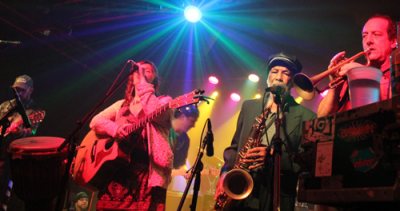 One of the last times Big Leg Emma set feet in the Gem City, they told us that the band's sound, if it had to be bottled up and branded, would likely be labeled as something like Americana-jam.

Anyone who's caught Big Leg live knows that that's true enough, but it's, well, not enough.

Sure, (and like we've said before) there's plenty of folk and old-time influence rooted in the stellar quintet's sets, as well as clear nods and leans toward the jam traditions that followed. But up on stage, Big Leg – it seems more than ever these days – is usually walking somewhere else, somewhere new, with it all.

And on Saturday, Oct. 18, Big Leg's genre-bending, groove-heavy path – being crossed with special guests and local favorites Daybreak Radio and Matt Texter – shimmies back to Erie, straight to the Kings Rook Club's spacious, kickin', recently-revived downstairs concert space, which has re-opened for shows in recent months to much local acclaim.

Grit-folk troubadour Texter's actually going to be keeping things live and lively with free pre- and after-parties in the Rook's upstairs lounge both before and after Daybreak Radio's and Big Leg's sets, so sweet sounds will abound throughout the club that night.

The Rook's doors open at 8 p.m. for the 21+ show, with music starting at 9. And, it's a deal: The $7 cover ($6 for existing Rook members) also buys a one-year membership to the members-only club.