Environmentalist and founder of 350.org will talk climate change as part of Edinboro University's homecoming.

by Mary Birdsong
View ProfileTwitterRSS Feed
October 1, 2014 at 6:35 AM 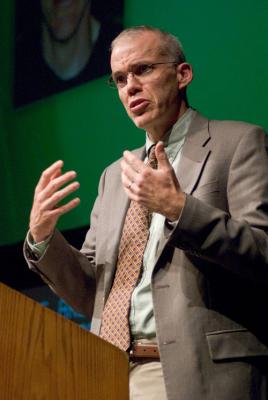 Fresh from participation in the People's Climate March in New York City, Bill McKibben, author and environmentalist, is overwhelmed by the energy of the more than 300,000 people who showed up to voice their support for measures to contain climate change. "The ranks of people just kept coming…" he says. "It's amazing to see, finally, people able to overcome their dread and take a stand."

He will bring that energy with him to Edinboro University Oct. 2, when he presents "Can We Still Fight Climate Change? Lessons from the Front Lines," as part of the University's homecoming weekend activities. The presentation is free and open to the public.

An author of 14 books about the environment, McKibben has been called by Time Magazine "the planet's best green journalist," and is considered by the Boston Globe to be "probably the country's most important environmentalist." His book, The End of Nature, which was published in 1989, is considered the first book on climate change for a general audience. He is founder of the planet-wide grassroots climate change movement, 350.org, the primary organizer of the People's Climate March.

McKibben founded 350.org because he thinks that people working together every day in every corner of the globe is vital to making things happen in a meaningful way. Through this organization, he and his colleagues also wanted to prove that the stereotype of an environmentalist as a rich, white person was false. Through 350.org, millions of people of all colors, faith, and socio-economic standing have organized and demonstrated.

But he also acknowledges the importance of a large-scale movement that involves governments and industry. "We also need to come together for national and international action," he says. "We need congress to give us a price on carbon so all our local efforts for things like solar panels and windmills will come more easily."

During his presentation, McKibben will also explain why this is not just an environmental issue, but one that touches all aspects of our lives. He says that for the past century, the global community has viewed the world and decision-making through a purely economic lens. Now, he suggests that we need to take a more interdisciplinary approach, asking the question: "How does this (a decision or action) contribute to the physical condition of the planet?"

Why is that shift in thinking crucial?  Because, McKibben says, "the summer Arctic has mostly melted, the West Antarctic ice sheet has been destabilized, the ocean is 30 percent more acidic, and the weather is really weird. And that's with one degree of temperature rise globally – we're on track for four or five."

But dismantling the power that the fossil fuel industry holds over legislative decisions will be tough, he says, suggesting that a new "currency" (passion, for example) is needed to counter the plentiful cash of the industry.

When he speaks at Edinboro, he will be asking for us to help build that currency. His message will be "that we need to act boldly now, and that we can act boldly now. It's a matter of will."

But don't take it from me. McKibben is a dynamic speaker worth anyone's time – even if you disagree. Go hear him out.