Block Parties continue to bring life, local flavor and sounds of the city to the streets and parks this coming season.

by Hannah McDonald
View ProfileLinkedInRSS Feed
June 6, 2018 at 9:45 AM 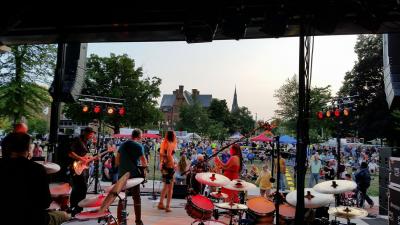 Contributed Photo
The Vendettas perform for a Block Party crowd on Aug. 10, 2017. This yearu2019s series, like last yearu2019s, will be held in parks and other venues as opposed to on city streets.

One of Erie's most anticipated summer celebrations will continue its mission to bring life, local flavor and sounds of the city to the streets and parks this coming season. Rain or shine, the ever-popular block parties will be held in five venues across Erie throughout the summer.

Coming hot off their bike night show at Buffalo Wild Wings on June 6, Erie rock band Twisted Lid will headline the first block party on June 7. Starting at 6:30 p.m. Griswold Park will be filled with timeless rock-'n'-roll favorites, along with the soulful musical versatility that The Breeze Band — who will also perform at the event — brings to their shows.

Just a fortnight following, Dobbins Landing on lower State Street will have its first opportunity to host a block party. June 21 will feature local restaurant specials and musical entertainment from Money Shot 2.0 and Key West Express.

The first block party of the following month will take place in UPMC park on Thursday, July 5. Residents of the Flagship City will hear country music from Erie bands Crooked Creek Brothers and REFUGE.

August will host the final two block parties of the season, the first taking place on Aug. 5 and the last on Aug. 30, deep in the dog days. Cosmic Rhythm — runner-up for Erie's Best Jam Band of 2014 — and Eric Brewer & Friends, some of the area's favorite progressive improvisers, will take the stage at Perry Square on Aug. 5. Erie family band East Ave. will help close out the season on Aug. 30 at Griswold Park when they perform alongside soul band The Groove.

All block party events are free to attend and will run from 6:30 to 10:30 p.m. at their designated locations. Partial proceeds from sales at the parties will go to Erie's C.A.R.E. Fund which works to improve the downtown area. — Hannah McDonald