Rob Zombie's The Munsters is a strange experience 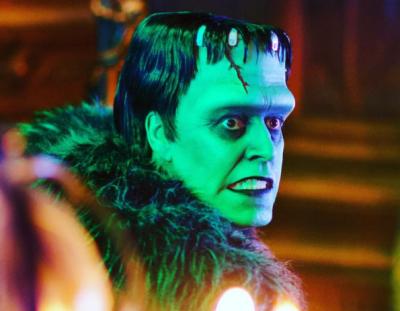 Shock-rocker turned film director Rob Zombie has had a strange career. After hitting the scene with ultra-violent exploitation throwbacks like House of 1000 Corpses and The Devil's Rejects, he moved on to making polarizing avant garde horror films like Halloween II and The Lords of Salem (his best film). Naturally, the next step in his career would be a PG-rated family comedy based on his favorite TV sitcom. The Munsters is possibly the weirdest film released in years. It's not a good film by any stretch of the imagination, but one that should be applauded for having the guts to be as unapologetically bad as it is.

In Transylvania, young Lily (Sheri Moon Zombie) is looking for love but the various monsters and ghouls she's been dating have turned out to be duds. This all changes when she lays her eyes on an aspiring stand-up comedian/rock star named Herman Munster (Jeff Daniel Phillips). Their meeting is love at first sight and nobody, not even Lily's meddling father (Daniel Roebuck) can tear them apart.

With a script that is 90 percent dad jokes, garish colors (apparently the film was originally planned to be shot in black-and-white) and sets that look like they come from a middle school play, this film fails in every conceivable way. That said, it is refreshing to see something so unique in this world of algorithm driven, pre-approved content. It feels very much like Rob Zombie's own vision (no studio executive would greenlight a script this bad) and that gives it its own kind of charm. Is The Munsters a bad film? Absolutely. Am I still recommending it? Yes. The Munsters is playing exclusively on Netflix.