Boogie With The Broke Boland Band, GabbaGhoulies and Paper Matches At Kings Rook

Matt Boland will return in not one, but two bands to perform at the beloved Kings Rook Club in Erie Pennsylvania. 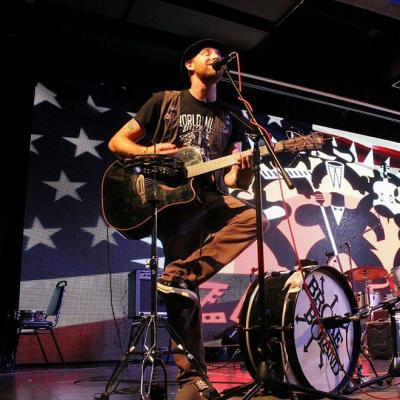 Those familiar with Matt Boland are likely more familiar with his solo moniker, Matty B. A high-energy local who never stops writing or performing, there's a good chance Boland has played every venue in Erie that features live music at least once. On February 2nd, Boland will return in not one, but two bands to perform at the beloved Kings Rook Club.

"I like playing at Kings Rook because it's a guaranteed fun crowd," says Boland. "Unfortunately, our music scene is in a sad state as far as venues go. There's only a few left, especially for rock and roll. But I feel happy that we're fortunate enough to have a strong venue like the Rook to help keep our live music scene intact."

And if there's anything Boland (and the Kings Rook) knows (about), it's rock and roll music, which appears to be the unifying element between the three wildly different acts on the bill.

"The [Broke Boland] Band is basically a three-piece version of my songs," says Boland. "It's very high energy. But it's kind of multi-genre with elements of rockabilly, folk and blues mixed in. I really don't know how else to describe it...kind of like if the Ramones wrote folk songs!"

"I like the horror-punk style and I really appreciate Bob Kellogg's songs and everything he has done for our music scene over the past 20 years," says Boland, alluding to Kellogg's long work with the Coffin Bangers and My 3 Scum. "As far as Paper Matches go, I recorded an acoustic album for Johnny Major, lead singer and songwriter, and was blown away. The kid's got a great voice and great songs and I can't wait to see what his band brings to the table."

When asked if he had any parting words, Boland had this to add:

"Keep going out there and listening to live music. Don't worry about where everybody's at. Worry about the quality of what you're hearing. There is an amazing amount of talent in this town as far as music goes. And some incredible bands. But the thing that keeps these bands moving and productive is playing in front of people. So please get out and support local music!" — Aaron Mook