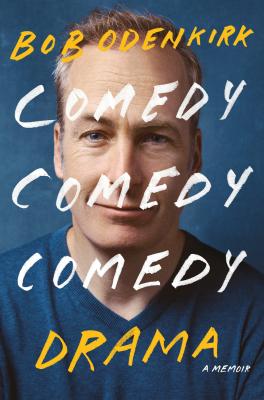 For those who were first introduced to Bob Odenkirk through AMC's Breaking Bad or its spin-off Better Call Saul — or, perhaps even for some, 2021's action-thriller Nobody — his origins may be a bit surprising. For longtime fans, if you had told them 20 years ago that the surrealist sketch comedy master behind Mr. Show with Bob and David (and Saturday Night Live writer best known for penning Chris Farley's iconic "Van Down by the River" motivational speech) would be collecting Golden Globe and Emmy nominations for his dramatic acting and winning over critics as a convincing action star, well… they'd likely think you were performing some absurdist sketch.

This, of course, is part of the point of Odenkirk's appropriately titled Comedy Comedy Comedy Drama, which serves as a reflection on the self-described "strange trajectory" of his career. With his book, he demonstrates the big breaks of his career, whether obvious at the time or their significance only understood with hindsight. He describes his early years and how his obsession with sketch comedy was influenced heavily by the timelessness of Monty Python ("Python was like my Bible … [but] kinder and more truthful") and how a trip when he was 14 to Chicago's Second City Theater, famous for its improv, gave him the first inkling that comedy could actually be a career.

One thing that Odenkirk makes clear though is that much of his career is the result of sheer luck: being at the right place at the right time or happening to know someone else catching a big break who brought him along with them. "There was no obvious route to fame, or even a 'career,'" Odenkirk explains. "Every day was just write something funny today, then see what happens."

What happened, of course, was SNL (where Odenkirk freely admits to having had a chip on his shoulder), followed by experimenting in the early alternative comedy scene, before getting brought aboard as a writer for the short-lived but influential The Ben Stiller Show where he became good pals with David Cross — his partner for the iconic cult-favorite sketch comedy series Mr. Show. For Odenkirk, it's clear that financial success and fame were not the goal. "I wanted lots of people and ideas and offbeat things to happen to me in my life, more than I wanted to play golf or drive a big car or tell people to take their shoes off when they came into my house," Odenkirk muses.

His memoir requires some base knowledge of comedy history to fully appreciate, but reading about his journey from writer to sketch comedy surrealist to Very Serious Actor provides worthwhile lessons for all readers: hold tight to your convictions, flirt with the road less traveled, never expect a big break (but try to recognize when they happen), and, maybe above all, surround yourself with good people.