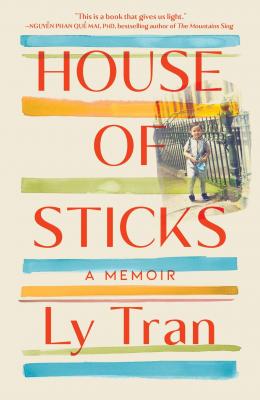 In 1993, at just three years old, Ly (pronounced "Lee") Tran and her family emigrated from a small town in Vietnam to New York City to begin a new life, made possible through a humanitarian program run by the U.S. government for prisoners of war. Her father, a former lieutenant in the South Vietnamese army, spent seven years in a POW camp barely surviving before escaping back to his hometown and eventually marrying Ly's mother.

The family's American dream did not turn out as planned, however. In this insightful and oftentimes heartbreaking new memoir, Tran details growing up as an immigrant in late '90s and early '00s America, the struggle to assimilate to American culture while still honoring the cultural expectations of her parents, and the impact it had on both her well-being and mental health.

Tran's account of life as an immigrant in America can be jarring, especially to those unfamiliar with the absolute poverty that many immigrants find themselves in when first arriving in America and sometimes long after. An early scene in which a young Ly, not knowing better, plays with a cockroach — one of many that infest the family's apartment — is unsettling, to say the least. For many, the squalor in which the family lives is unimaginable, but is a harsh reality for those who have limited options.

Compared to war-torn Vietnam, though, this is a new beginning for the family, and they strive to make it work. Starting with a pseudo-sweatshop in their own home making cummerbunds and ties to make ends meet, the family eventually buys their own nail salon, struggling to stay afloat. Tran grapples internally with her sense of duty to her parents, feeling as though she is betraying them when she goes to college and has to stop working with them at the salon.

One especially poignant moment where Tran's moral dilemma impacts her is in her need for glasses. Her father, believing that glasses are a government conspiracy, refuses to even discuss the possibility of her needing them, stating that she and her school are lying. Wanting to obey her father, Tran spends years with blurry eyesight, unable to see the blackboard in school and causing health issues, including headaches and bruising in and around her eye muscles. It is not until she attends college, living in a dorm, that she finally got corrective lenses, all the while burdened with thoughts of betraying her father.

Throughout the book, Tran tells her coming-of-age story with such intensity and conviction that it is difficult to believe that she was once the very meek, voiceless child she describes, unable to articulate her feelings or even understand them. Each chapter brings incredible insight into the immigrant experience, what it is like to learn an entirely new culture, and what it means to forge a path of one's own. — Ally Kutz