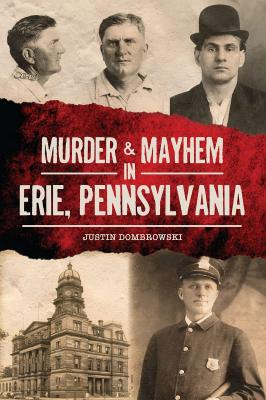 To write Murder & Mayhem in Erie, Pennsylvania, author Justin Dombrowski dove deep into the historical archives to recount the tales of six lesser-known crimes from Erie's past. The book, to be released on June 13 by The History Press, is the culmination of well over a decade of intense interest and meticulous research.

It all began after Dombrowski graduated from Central Tech in 2007 and he enrolled at Mercyhurst University to study criminal justice. During this time, he learned about some of the more well-known crime cases that put Erie in the national spotlight and he wondered about some of the older, more forgotten crimes of Erie's past. This led to a trip to Blasco Memorial Library 14 years ago — a trip which ultimately led him down the path to write Murder & Mayhem. Around this time, he interned for the Erie County Detective's Unit under District Attorney Brad Foulk as well, an experience which left a lasting impact.

"Brad had really … [instilled] life back into some of Erie's cold cases," explains Dombrowski, adding he noticed how dedicated Foulk was to the victims of his cases, something he made sure to prioritize while writing his book. While some readers may focus on the "gruesome and macabre," in his mind, it is more about remembering those who never received justice as well as those who escaped it. Says Dombrowski, "[O]ne of the more rewarding aspects of researching and writing this book was being able to give an identity to some of the victims of the crimes."

Interning with the county also gave him firsthand experience working with detectives, prosecutors, attorneys, and other local agencies, giving him a deeper understanding of the behind-the-scenes work and coordination that goes into investigations. This is in "stark contrast," he notes, to the way that investigations were run in Erie a century earlier, cases that, with the passage of time, have been mostly forgotten or overshadowed.

Murder & Mayhem is broken down into six chapters, each covering a unique case. In one, he recounts the 1905 murder of a police detective. In another, he revives the story of the Madman of West Lake. The final chapter covers the shocking and tragic murder of 27-year-old Rachel Levin in 1925. "Everywhere there was blood, blood, blood," the Erie Daily Times sensationalized.

Dombrowski stresses that while the true crime aspect might draw readers in, such stories also serve as glimpses into Erie's broader past. His historical research is thorough and tight (check out the pages and pages of citations and notes, if you need convincing) and from it, he weaves together stories that are both deeply personal, but are additionally of Erie itself. True crime and local history are intertwined, he argues, adding that this connection between the two is often overlooked. "By writing this book, I hope to begin to at least change that notion," he says.

There were numerous obstacles during his research. For one, the city police department's case files before 1945 are gone. "None of these case files for any of these cases exist anymore and that includes the coroner inquests [and] autopsy reports," he says. "Erie itself has changed so much since these crimes occurred, an additional challenge was finding the original sites of where some of these occurred, especially since most of the locations written in this book are no longer intact." As part of his research, he tracked down the locations and would try to visualize the location as it had been when the crime occurred.

So, much like the detectives who Dombrowski writes about — including an internationally-known private eye coined "the female Sherlock Holmes" — he began to piece together evidence from old Erie Daily Times and Erie Dispatch microfilms as well as courthouse and other records housed at the Erie County Historical Society. His experience with criminal justice, history, and genealogy all coalesced to bring these stories to life in a fascinating and engaging read.

As for what's next? Dombrowski is keeping busy. He's working with The History Press on a book about Erie's Backyard Strangler, which has a tentative release date of spring 2023. He is also under contract to write a book about the 1911 desecration of Erie Cemetery's famous Scott Mausoleum. On top of that, he is developing two other book proposals while planning to grow his Erie True Crime page, Shadows from the Boulevard, and create a website to highlight smaller individual cases from Erie's past.

You can purchase a copy of Murder & Mayhem in Erie, Pennsylvania from your favorite book retailer or snag a signed copy at Peach Street's Barnes & Noble for an author event on June 18 at 2 p.m.