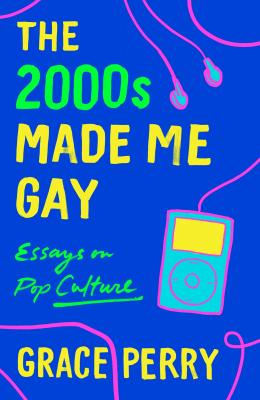 Grace Perry doesn't actually think the 2000s made her gay; but the title was a lot shorter and potentially more relatable than The 2000s Are to Blame for the Specific Kind of Gay Person I Am Today, an alternative Perry mentions in the book's introduction.

A witty and intriguing debut, Perry's essay collection, The 2000s Made Me Gay, is more than meets the eye. At a glance, it seems to be a farcical look at early aughts pop culture and the queer representation — or lack thereof — it possessed. But a further dive into the essays collected in this book reveals a critical examination of the popular culture that many millennials grew up with, recognizing and identifying problematic themes as well as explaining the potential reasoning for them.

Perry goes further, though, acknowledging that although we can — and have — moved away from these problematic representations, we can also appreciate them for what they meant to us at the time and why we have so much nostalgia for them. Instead of completely disregarding our past, Perry allows for the consideration of remembering the time fondly while also seeing it through a critical lens of better representation for the LGBTQ+ community.

Split into twelve essays, Perry covers many of the most nostalgic parts of millennial teen culture: the Harry Potter series, Mean Girls, Katy Perry's "I Kissed a Girl," the Disney Channel, Gossip Girl, and Taylor Swift all feature in this wonderful, perceptive, and captivating look at how the aughts shaped the millennial generation.

So, maybe the 2000s didn't actually make anyone gay, but they certainly defined what it meant to be a teenager at the start of this century. — Ally Kutz