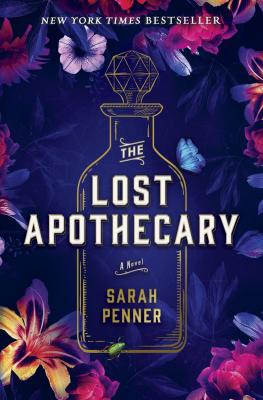 On a small, unassuming street aptly named Back Alley, a door sits in London in the late 18th century. Just inside is an empty storeroom with dusty shelves and a barrel of barley, seemingly undisturbed and uninhabited. But behind the wall waits Nella the apothecary and her shop of remedies and concoctions. Known for her knowledge of the trade, the once-healing apothecary has turned to more sinister dealings, providing women with well-disguised poisons to rid themselves of the men in their lives for varying reasons. When her newest customer turns out to be a 12-year-old girl named Eliza, the surprised apothecary is thrown into a series of events that jeopardizes her livelihood and threatens to expose all the women recorded in her register and the men they had poisoned.

In present-day London, once-aspiring historian Caroline is reeling after discovering her husband has been cheating on her. After planning to go on vacation with him for their 10th anniversary, she instead embarks on a road to discovery that begins with digging through the mud near the river Thames. When she turns up an old apothecary vial, her interest in its history leads her to a string of unsolved apothecary murders from over two centuries prior, twisting together the past and present in more ways than one.

A debut novel from Sarah Penner, The Lost Apothecary is a stunning imagining of a sinister secret lurking below the surface of 18th century London. Written in beautiful prose with characters that come to life on the page, the only major fault that can be found is the fact that there isn't enough of it — Penner could have easily written volumes about each character and their place in the history of the novel.

Right from the start, the book pulls the reader in, introducing each character and bringing them to life through shared experiences, many focusing on overarching themes like womanhood and motherhood, as well as the subtler but ever-present sisterhood of womankind as a whole.

Told between the perspectives of Nella and Eliza in the 18th century and Caroline in the present day, each chapter is easily devoured with a want for more: more about the women's lives, more about the mystery surrounding the apothecary, and more of the fantastic writing that defines The Lost Apothecary. — Ally Kutz