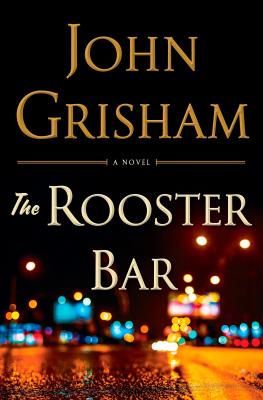 Last summer you couldn't walk ten yards on the beach without seeing a copy of The Rooster Bar. Everyone was reading John Grisham's 39th best seller. Grisham is a brand, and everything he puts out immediately turns to gold. You know where this is heading — The Rooster Bar is a poor effort, gold-plated or not. It is neither mystery nor thriller, genres where Grisham has excelled, and, given its inspiration, it almost qualifies as social commentary.

That inspiration, Grisham admits, was a 2014 article in The Atlantic which exposed sleazy practices by for-profit law schools. There are indeed such schools, preying on the legion of naïve youngsters who want to be lawyers but for whom there are no jobs after graduation. Marry that level of demand with the undisciplined way the government hands out student loan money without regard to the eventual ability to repay it, and you have the setting for The Rooster Bar.

Grisham's take on the scandal revolves around four law students nearing graduation at a DC for-profit institution called Foggy Bottom Law School. The four weren't law school material or they'd be attending a reputable institution, but Foggy Bottom, owned by an evil robber baron, tricked them with false advertising into borrowing hundreds of thousands each from the taxpayers to pursue worthless law degrees. After one of the four commits suicide rather than face his parents with the announcement that he was in the hole for about $300,000 and had no prospects of employment, the other three drop out and decide to make money the old fashioned way — they steal it. They draw their final year of student loan money from the government despite having no intention of returning to class. Bankrolled courtesy of the taxpayers, they decide practicing law at the bottom-feeder level of DC's municipal court system really isn't that hard, and, more importantly, they notice that no one there ever checks lawyers' credentials to make sure the lawyers are real. That last part, at least, is authentic. In my 40 years of practice, no one has ever checked mine, and I know of one lawyer who tried cases in Federal court for several years after being disbarred. Pretending to be lawyers works for the students, until they get greedy.

It's an interesting enough plot, but the quality falls far short of Grisham's earlier works, which were page-turning legal thrillers or intriguing mysteries. The Rooster Bar seems hurriedly written and unedited. It opens at a glacial pace with a massive info dump, a lazy way to introduce the reader to characters and setting by simply narrating information for pages on end. It's also full of lifeless, inauthentic dialog. I was most surprised, and disappointed, by the fake world Grisham created for his characters. Grisham is known for steeping his stories in the realities of the legal world, and he could have told this tale without the fantasy. No one "owns" a 400-lawyer law firm, much less several of them. Young, freshly hired associates in big firms don't have guaranteed employment contracts, and law schools don't call students' homes if they cut class. You'll find all of that, and more, in The Rooster Bar.

But the biggest disappointment was the climax. There wasn't any. The book just ends. No big reveal, no excitement. It just ends, and predictably. It's not even clear what happens to the villain. Two and a half stars, at best.

Bantam; 374 pages; $23.00 (softcover) // Richard Perhacs practices law in Erie and holds a Master of Fine Arts in Popular Fiction. He can be reached with comments and suggestions for reviews at rperhacs@gmail.com.