Book Review: The Sun Down Motel

When it comes to suspense, Simone St. James' new novel is booked solid 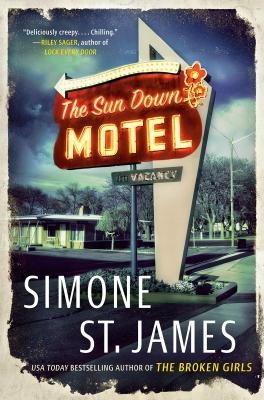 In 1982, Viv Delaney wants to be anywhere but home, so she hits the road with dreams of New York City. She falls short, ending up in Fell, a small town in Upstate New York. Viv takes a job as a night clerk at The Sun Down Motel to pay for her move to NYC, but the town's past keeps her tethered to the motel, searching for answers. But then Viv disappears without a trace, leaving behind more questions.

In 2017, Carly Kirk, having always been obsessed with the mystery of her aunt Viv, who disappeared before Carly was born, moves to Fell to find out what really happened in 1982. Following in her aunt's footsteps and taking a job as the night clerk at The Sun Down Motel, Carly quickly realizes that not much has changed since that fateful night her aunt disappeared all those years ago. Caught up in the mystery of the town and its motel, Carly finds she is more like Viv than she may have known – and danger is lurking right around the corner.

With incredible attention to detail and characters that come to life before your eyes, Simone St. James' writing evokes such strong emotions that it is difficult to put this book down. Much like a suspenseful horror movie, many moments are spent wanting to hide behind fingers, peeking out to see what happens next. The Sun Down Motel's mysterious details and creepy occurrences will send chills down any reader's spine, feeling like there is someone just over their shoulder, watching their every move. Each character holds so much personality that it is difficult not to begin rooting for them after getting to know them. Viv Delaney has the perfect Winona Ryder-esque 1980s vibes that make it all the better to envision her nights at the motel and her days spent looking for answers. Carly is what many bookworm, true-crime-obsessed 20-somethings want to be: someone using their knowledge and research skills to solve mysteries from the past. Reader be warned, though: once the sun goes down at The Sun Down Motel, there's no telling what you might encounter. — Ally Kutz