The Bird-while:Poetry of the Great Lakes basin and beyond 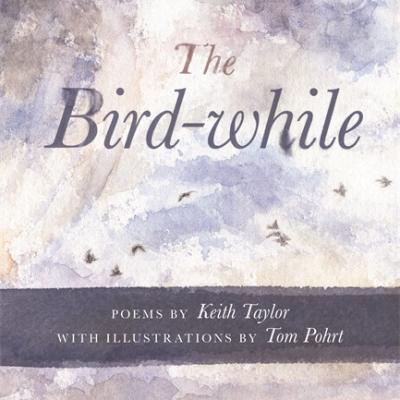 Keith Taylor takes his book's title from Ralph Waldo Emerson, for whom a "bird-while … is the space [where] most of the wild birds will allow you to make your observations … when they alight near you in the woods." Even the handful of poems here that make no mention of the natural world enact the quick, acute perception of Emerson in an 1838 journal entry called "a natural chronometer" and "one of the metres" of poetry. An avid birder of long standing, an annual resident of the University of Michigan's Biological Station, and a boots-on-the-ground environmental advocate, Taylor ranks with poets such as Gary Snyder, Jane Hirschfield, and Jim Harrison in his supple use of this "metre."

Making a good poem does take a lot more than keeping a life list or distinguishing bear scat from wolf. It takes shrugging off all traces of sincerity, deep reading in the poetic tradition, and steady practice of the art in all its proliferating forms. In a poet of Keith Taylor's sensibility, such commitment leads to the deceptive simplicity of a poem such as "Later," which describes how "jack pine seedlings push up through the peat" a year after the Sleeper Lake Fire ravaged 8,500 acres of northern Michigan forest, how the seedlings

… grow an inch high around the edge

of a swamp covered in new rushes,

emerald green against the charred trees,

dead except for their cones forced open

by heat, scattering seeds in the wind.

Notice how the poem emphasizes the "emerald green" the fire has made possible, how the "charred trees" deepen the green by contrast, how "dead" lands with a thud of finality that immediately gives way to the "except" of the pine cones death has forced open to re-seed the forest. Life and death's back-and-forth happen as we read.

I've loved Keith Taylor's poems for almost 40 years. I invite you to find out why.

I could have chosen any other poem in The Bird-while to illustrate these and other pleasures: The verve with which Taylor uses a strict syllable-count to shape his lines, the unobtrusive poetic music, the sorrow with which he celebrates the vanished glories of the passenger pigeon, the moments of goofiness and wonder.

I've loved Keith Taylor's poems for almost 40 years. I invite you to find out why.