Illustrated delights for the tightest tightwads in tights 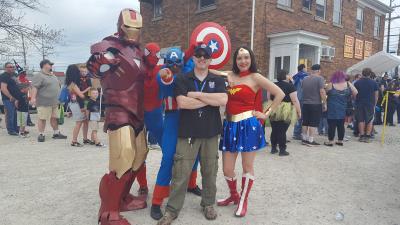 On an ordinary day in the comic book world, walking out of a merchandiser without paying would be license for a Batarang to the hand or a web bolt to the face. After all, neither the long arm of the law nor the costumed vigilantes who operate outside it can abide thieves.

Free Comic Book Day, however, is not your typical skip between skyscrapers. Fear not, citizens, because for one extraordinary day, you can walk out of a participating independent comic book shop with one (or more) of 50 eligible titles without incurring so much as a slap on the wrist. In fact, these businesses welcome it.

Is this the chicanery of some conniving mastermind? The feint of some foul foe? If Free Comic Book Day is the gamma radiation that transforms your mild-mannered appreciation for the art form into Incredible Hulk-like passion, then yes, it is a trap. The event was first conceived in 2002 by comic book lovers as an initiative to clone more comic book lovers. The experiment involved one free comic book on the first Saturday of May, just for showing up. Needless to say, it has blown up in a big way.

For over 30 years, some of the area's most ardent comic book lovers have joined forces at Books Galore, an unassuming brick building near the Millcreek Mall. The family-owned shop has been participating in Free Comic Book Day since its inception, and according to longtime organizer Doug Phillips, "every year the event is bigger, better, and more well-attended than the previous year." To entertain the crowds, Books Galore is bringing in costumed greeters, face painters (on site from noon til 5), comestibles courtesy of The Big Cheese food truck and Little Shop of Donuts, a full afternoon of live music (one-hour slots for Brooke Surgener, Chris Ehrich, Paolello & Gone, and Matt Broke Boland, beginning at noon), and even a musical petting zoo.

As for what you'll be waiting for: all 50 of 2018's titles (as selected by a panel appointed by Diamond Comic Retailers) will be available, and are divided into "Gold" (meaning higher-profile publishers) and "Silver" categories. Among the popular choices this year will be Avengers, Infinity Watch, DC Super Hero Girls, Disney Princess Ariel, and Star Wars Adventures. Phillips' personal pick is the debut issue of Image Comics' new sci-fi series Barrier. Weighing in at a whopping 53 pages, Barrier is the latest creation of celebrated writer Brian K. Vaughan (Y: The Last Man, Saga, Ex Machina).

Again, for taking part, you will get your pick of any one comic book. For acting the part (of a hero by donating a nonperishable food item to the Second Harvest Food Bank), you will be entitled to a second comic book. If you dress the part (of a character from the comics, sci-fi, fantasy, or video games), you may be awarded up to a third (!) complimentary comic book. Save some space on your bookshelf, because there will be steep discounts on paid content (yes, that is still a thing) throughout the store as well.

It's uncanny how quickly the transformation happens.
— Matt Swanseger

Community
5/5/2018 from 10 AM to 7 PM
Books Galore, 5546 Peach St, Erie, PA 16509
Free Comic Book Day is the first Saturday in May. It's a one day annual event that comic shops across North America and around the world participate in and give away comic books absolutely free t...

Making the Most of a Historic Crisis

by Matt Swanseger5/28/2020, 11:30 AM
Jefferson report examines opportunism in responding to disaster