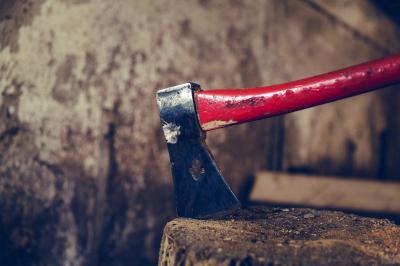 Things got a little bit dicey in the Borden household on the morning of Aug. 4, 1892.

That's when the maimed and bloodied bodies of Andrew and Abigail Borden were found, heads caved in as a result of numerous apparent axe blows. After Andrew's daughter Lizzie reports the discovery of her father's body to the family maid — and police find her stepmother's body brutalized in a nearly identical fashion — Lizzie becomes an instant suspect and a public sensation, with media coverage of the trial setting a modern precedent. Although Lizzie would eventually be acquitted, the aftershocks would be felt for some time.

The Lizzie Borden case remains a source of fascination, particularly by feminist scholars examining the severe strictures and abuses of Victorian era society and their psychological impacts on women — and how those conditions and torments might have created a broader complicity. Of course, it also proved ripe material for a historical drama in Sharon Pollock's Blood Relations, which debuted in Edmonton, Alberta in 1980 as a revision of her earlier work My Name Is Lisabeth (1976). It would go on to win the Governor General's Literary Award in 1981, bestowed upon the most exemplary Canadian literary work of a given year by the Canada Council of the Arts — it was the first play to earn the honor.

Thirty years later, Blood Relations still makes for compelling theater, ideal for the impending Halloween season. As details of that fateful morning and the events leading up to it are revealed  through conversation between Lizzie and her mysterious friend (lover? subconscious mind?) "The Actress," audiences are left to question what is fact and what is fiction, and upon whom the guilt of the gruesome double-murder should really be placed.

The All An Act Theatre production stars Natalie Waddell-Rutter, Lisa Simonian, Wayne Gardner, Shantel Kay, Sue Henson, and Chad Santos. Larry Lewis, who also plays a role, directs. All An Act will stage the play nine times between Sept. 24 and Oct. 10, to vaccinated (or recently tested COVID-negative) and masked patrons only – documentation will be required for entry. Not to put anyone on trial, but the community theater's life depends on the health of its players.

Whether you're on the scene or not, it's going to be a bloody good show.