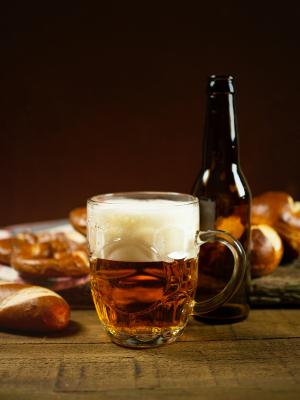 Lieben Sie Lager? The Volk at Lavery Brewing Company hope you do, as things figure to reach critical Maß this Saturday at their Sixth Annual Craft Lager Fest.

An Oktoberfest in all but name, the Bavarian-themed event promises plenty of Teutonically-inspired brews, foods, and costumes (e.g. co-owner and founder Jason Lavery in lederhosen). From noon to 4 p.m. this Saturday, sample drafts will rush forth like the blue Danube from the following breweries:

Ale not be damned, but certainly deemphasized, this one's for the bottoms. Lagers submit to a different brewing process that uses bottom-fermenting yeast strains that operate at colder temperatures over longer periods of time (lager means "to store" in German). Like ales, they can exhibit a broad spectrum of colors and flavor profiles, but they tend to be malt-forward and optimal for quaffing. The bready palates of seasonal Oktoberfest lagers (aka Märzen) pair brilliantly with Brezeln (pretzels) or Spaetzle (dumpling noodles), and of course Wurst (sausage).

There's nothing purer than our love of lager — other than perhaps the 1516 Reinheitsgebot (German Beer Purity Law, which dictated that beers could only be composed of water, barley malt, and hops — no wheat because of flour shortages). In today's open-minded and wildly inventive craft brewing world, few things are verboten, but there's nothing wrong with keeping it clean.