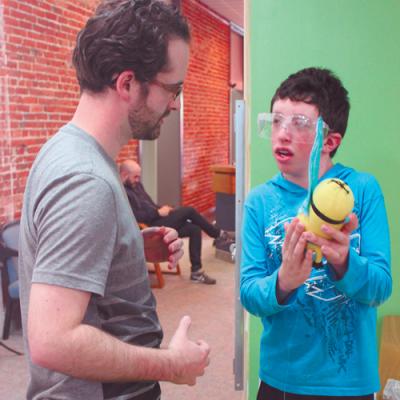 Annie Schmitt wears dangly, petite lemon earrings. Their luster matches the whimsical interior of Box of Light, an educational non-profit studio that uses technology to create workshops for students that engage them in critical thinking.

At Box of Light, Schmitt and Jude Shingle (co-directors as well as partners in life) don't want students using an app to learn to read. Instead, they want students to create the app, learning to read along the way. This idea enforces a creative-innovative mindset, something the duo says is part of our future knowledge economy.

The knowledge economy idea dates back to the mid-60s, when Peter Drucker wrote The Effective Executive (the term was later popularized in his text, The Age of Discontinuity). Drucker describes the difference between a "manual worker": someone working with his or her hands to produce goods and services; and a "knowledge worker": someone who uses his or her brain to produce innovation. One is not more important than the other. Rather, the knowledge worker is a natural progression of our global economic infrastructure.

Since our agricultural days, America has progressed through several economies. Many believe that we're now within a global knowledge economy, a byproduct of technological advances that greatly increased after the Internet boom. Box of Light wants to empower students as creators, advancing the ideal mindset for this knowledge economy.

Luckily for Erie, the co-directors (who later found out they actually grew up just a block away from each other in Pittsburgh) eventually started dating; and in 2012, shortly after they married, Schmitt joined Shingle as a co-director at Box of Light.

An Inventor's Workshop is taking place on the day I visit Box of Light. The students are invited to bring items they may no longer use in order to invent something new. The studio has provided tables of miscellaneous objects, too (old soccer trophies, various action figures, water guns, and countless supplies like needle and thread, power drills, and hot glue guns), but many students choose to also bring in something of their own.

By the time I arrive, one girl has cut two stuffed-animal cats in half, one gray and one white. The fluffy cat guts dispersed on the table in front of her remind me of the last scene in Braveheart. A decent-sized pair of Fiskars scissors the TSA would certainly confiscate, and something that looks like a child-friendly saw, sit on the table in front of her. (There are adults around, don't worry.)

I watch as she sews the two cats back together (one with a white head and gray butt and the other with a gray head and white butt). I ask her what she's making. "I'm going to give one to my best friend," she says after gluing a miniature rubber cow head in between each set of cat ears. We conclude that they are like friendship bracelets, but way cooler.

The inability to mess up is imperative to Box of Light's philosophy. "There are no right or wrong ways to do things here," Schmitt says. The studio hopes that this low-pressure environment gives students the chance to indulge their creativity, knowing there is no need for the end result to be "good." 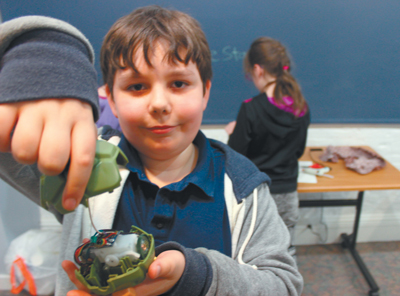 They also use an education system called STEAM. You might have heard of STEM (science, technology, engineering, and math), but STEAM incorporates the "A" for the arts. This recognizes that success in technological fields is correlated to an individual's ability to critically think, which education experts say is best developed through exposure to the arts.

This summer, the studio will offer seven full-week programs available Monday through Friday for ages six to 14. This is the fourth year the studio is offering workshop camps – their largest to date. They started with two workshops and are now offering nearly 30. The Inventor's Workshop is included in many of the camps this summer, including other workshops like Minecraft Maniacs, Comic Book Creators, and Web Design.

Many of the workshops involve engaging technology such as the MaKey MaKey: a software program designed by a couple of MIT graduates. It allows kids (or adults!) to experiment with conductive objects by turning them into controls for a computer via a circuit board connected to a USB. For instance, you can create piano keys with bananas or a video controller from playdough.

Box of Light also utilizes a robot that they've used in the past to aid blind students while building with Legos. The robot, using a color sensor, can detect which color a student wants to use and bring it to her side. This may sound minuscule, but for a blind child – participating without the normally-needed help from someone else – it's monumental. Playing is a primitive practice that is imperative to any child's development, and the technology available at Box of Light makes play more accessible to disabled children.

The studio has also held a girls' tech week that Schmitt is especially smitten with. "After they leave here they have a terrific amount of confidence," she explains. She's interested in advancing women's roles in fields generally populated with men, and she's not just preaching this lifestyle; she's practicing, too. Recently, she finished a woodworking class at Edinboro University where she learned some skills she's hoping to share with other girls.

Shingle is no stranger to the art world, either. He majored in studio art at Allegheny College where he met a then lip-pierced Schmitt (with whom he was immediately infatuated, even though both of them were in relationships with other people at the time). He's dabbled in some filmmaking (his film Eudaimonia won Best Short Film at both the Colorado Environmental Film Festival and Artivist Film Festival in Hollywood in 2008), he worked at the Erie Art Museum for two years, and later taught film classes at the Inner City Neighborhood Art House.

My time at the Inventor's Workshop has sadly ended. I am delighted not only to see what some of the kids are inventing, but also to hear why they chose to make their inventions. I leave reminded that science and art are part of a symbiotic relationship. Both require attention to detail. Both require dedication and practice. And both are inherent in today's knowledge economy.