by Nick Warren
View ProfileTwitterInstagramRSS Feed
May 8, 2019 at 4:15 PM 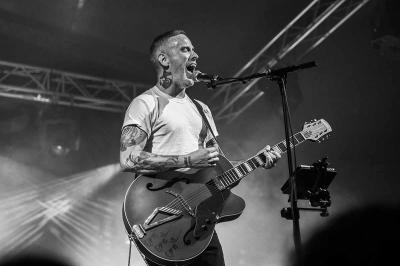 Nathan Gray, singer of BoySetsFire, will be performing at Jekyll & Hyde's, along with another pillar of the indie world, Jonah Matranga. For music fans of a particular age, now mostly in their 30s, this is great news. Growing up in the 2000s, there were certain indie bands that were special to you and your friends and certain albums that everybody seemed to know. Personally speaking, one of those bands was unquestionably BoySetsFire. The Delaware post-hardcore band had a visceral energy to them, fueled by a politically progressive mindset that was immediately evident in their lyrics, with Gray's soaring vocals combining melodic singing and gritty screams. Before the band's hiatus in 2006, they released four albums and nine EPs and split bills with bands like Snapcase and Coalesce.

Known chiefly for his work as onelinedrawing, Matranga is a relatively prolific songwriter, with numerous releases under his own name. In the '90s he helped lead the alternative band Far, releasing four albums during that decade, being a highly formative band for the emo sound of the early 2000s. The band reunited in 2008 before disbanding for good in 2011. In 2000, he formed the emo supergroup New End Original with members of Texas is the Reason and Chamberlain for a harder, fuller take on his solo material (the band name itself being an anagram for onelinedrawing). Joining the singer-songwriters that evening will be the first appearance of No Comply, an exciting new local band made up of members of This American Song, Knifefight the World, and Isadora, who grew up with these certain songs as well.— Nick Warren