When the clattering argument about what emo really is and whether Braid can really be defined as such is stripped away, it is apparent that the vast majority of the band's old fans are overjoyed by this record. 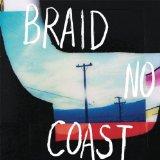 Fifteen years ago, emo kids were made just a little bit sadder when indie favorites, Braid went their separate ways to raise families in different cities. Now the pop-punk quartet is back and fresh off a club tour promoting a comeback album that is generating a lot of critical buzz from fans. When the clattering argument about what emo really is and whether Braid can really be defined as such is stripped away, it is apparent that the vast majority of the band's old fans are overjoyed by this record. No Coast is full of mid-tempo guitar-forward rock that dares you not to shout along with the lyrics every time a chorus comes along. Chris Broach and Bob Nanna both give solid vocal performances, which often sound like a call and response to melodic fuzzed-out guitar picking. Punk-infused laments "East End Hollows," "Pre Evergreen," and "Bang" are sure to become concert standards from an album that will make any late-'90s indie fan hope Braid doesn't wait another fifteen years for the next installment. – Bryan Toy