Tracking the McDowell and Edinboro grad from softball to her doctorate 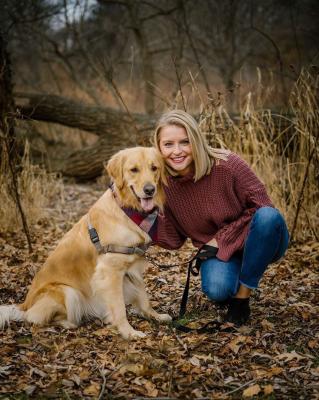 McDowell High School graduate Brenna Cosgrove has become a professional student to say the least. Her journey in education has never stopped, even with a gap year to gain some real-world experience as a middle-level health and physical education teacher in the General McLane School District. This gap year was after four years at Edinboro University, and was much needed, as it helped Cosgrove take the time to thoroughly research what programs would be the best in order for her to reach her long term goals. Her long term goals were to become a college professor in the field of health and physical education.

Cosgrove graduated from McDowell in 2010 and decided that Edinboro was the right fit for her for a variety of reasons. "I had an average at best high school softball career, but Edinboro gave me the opportunity to walk on and continue playing the game I have always had a great amount of passion for." In addition to Edinboro giving her the chance to play softball, it was a school close to home and also has a great reputation as a school that can help produce outstanding educators.

Cosgrove attended Edinboro from August of 2010 till May of 2014 and graduated with a 3.96 GPA while also being an all-PSAC performer, an Edinboro scholar-athlete, an academic all-American, and a three-year starter for the Fighting Scots. The early half of her college career was a learning experience, but her coaches did not lose faith in her and her ability as a slap hitter. As a junior, she hit .370, recorded 30 hits, scored 15 runs, and swiped nine bases. It was a true sign of what was coming for an even better senior season for Cosgrove as she hit .407, recorded 55 hits, scored 31 runs, and stole 24 bases to conclude a very successful college career. Athletics was always important to her, and her love and passion for sports certainly begins with her father Jim, a former standout high school baseball and basketball player at Sto-Rox High School in Pittsburgh.

Jim went on to the University of Pittsburgh where he pitched for the Panthers from 1981 to 1984. It was at Sto-Rox where he met the love of his life Diane, and each of them decided to stay in Pittsburgh and attending Pitt was the best option for them. Diane has been a software engineer for the last 36 years, and she is someone Cosgrove credits for not just setting a good example on how to be a good student, but also how to show kindness to all. When talking about her mom, Cosgrove said "My mom just has that unique kindness and sweetness about her. She is an incredibly dedicated and intelligent person, but what sticks out about her is her showing me and my sisters how to be kind and thoughtful through example. I have such a special relationship with my Mom and she still to this day is my best friend and go-to person."

Each one of her parents have had a great impact on her in their own unique ways, but what inspired her most to embark on the current journey she is wrapping up is truly herself. "I remember my college softball coach Dan Gierlak sat us down as a team during my senior season, and he told us to write down fifty goals we had. Obtaining a masters and a Ph.D. was something I always wanted to do along with becoming a college professor. I think that was a truly defining moment for me," Cosgrove said. While Coach Gierlak helped spark the idea and the mission, she first fell in love with the field of health and physical education as a high schooler. A job shadow with one of her mentors Ms. Tami Gillette made her realize that fostering young minds was what she was meant to do.

In the fall of 2015, Cosgrove continued her education, moving to Virginia and attending James Madison University. At James Madison, she studied exercise physiology while also working as a graduate assistant for the Morrison Bruce Center. It was in this assistantship where she encouraged girls and women both at James Madison and in the community to live healthier lives. "This mission was something I could really get behind," Cosgrove admitted. "I had some options for graduate school, but the beautiful campus, the assistantship, and the mission to help many women and girls be healthier and better educated in health was something that suited me well." After two years at James Madison, Cosgrove decided that Virginia was still not quite warm enough for her.

Her next step in education came as she headed to Auburn, Alabama, attending Auburn University. She is currently just a few months out from being awarded her doctorate degree, in the exact field she is passionate about; health and physical education. A ten year journey in higher education is nearly complete, and she recently found out where her next chapter would be beginning. Cosgrove moved back to the city of champions, Pittsburgh, Pennsylvania, but she will actually be teaching for a university in another state.

Cosgrove will live in Pittsburgh and work as a lecturer and faculty member for Saint Bonaventure University's Department of Physical Education and Sports Studies remotely. Cosgrove interviewed for the position in March just before the COVID-19 limitations, and just accepted the official offer last week to become a member of her new team at Saint Bonaventure. Living in Pittsburgh will allow Cosgrove to remain close to home, close to Saint Bonaventure, and also will allow her to live with her boyfriend Matt and their dogs Lady and Barkley. A new chapter in Pittsburgh just recently began for Cosgrove, and in August, she will wrap up her studies and begin her new job.

These days, Cosgrove admits she does not play much softball, but has played in both fastpitch and slowpitch softball leagues after her college days. She enjoys running and one of her newfound passions which is yoga. For the last year, she has been practicing yoga and says it has made a tremendous amount of difference in her life. It has been a good way for her to relieve the stress that comes with being a Ph.D. candidate.

For those in Erie, with college athletic futures, and goals to obtain higher education, Cosgrove had great words of advice and tremendous praise. "To start, I want to thank all of those who have kept in contact with me during my college days at Edinboro playing softball and those who have continued to support me when I left for James Madison and then Auburn. There is so much love from people in Erie, McDowell, and Edinboro. I could not be more thankful for the encouragement for always communicating with me and checking in. I also encourage those pursuing higher education to find the best fit for them. For me, that was definitely Edinboro, James Madison, and Auburn. Taking the visits there and trusting myself and my decisions was key. Putting in that extra time to understand the programs, assistantships, and seeing the campus is something I highly recommend because it made all the difference for me."

While attending Auburn was the right fit, Cosgrove admitted that Ohio State was almost where she chose because of proximity to home. She was very close to becoming a Buckeye, but she is glad she became an Auburn Tiger, and it took a visit to the campus and meeting her peers and professor to convince her it was the right place for her future.

The 2010s were filled with progress and hard work for Brenna Cosgrove. She graduated high school, became a college athlete, became a scholarship athlete, obtained an undergraduate degree, accepted her first full-time job, obtained a master's degree, and rounded out her studies for a PhD. It was ten years filled with blood, sweat, and even some tears, but Cosgrove can look back on the years 2010 through 2019 and see the mountain she climbed and the progress she made. With a new chapter set to begin in August, there is no question Cosgrove will continue to achieve and succeed in each venture and mission she puts her all into in the remainder of her career.