Brewer's always on, he's got a plan, he'll teach anybody, but doesn't want his students hanging around too long. Get to know the guitarist a little bit better.

by Cory Vaillancourt
View ProfileFacebookTwitterGoogle+RSS Feed
September 21, 2011 at 12:00 AM 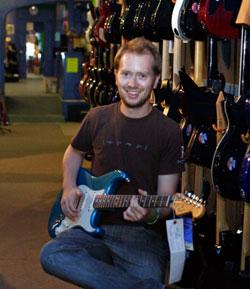 I?ve gone ahead and tried to separate the wheat from the chaff, and submitted for your aural pleasure six links below. If you need more than that, there are plenty of videos of this guy doing his thang; just watch out for cross-dressing hockey players or whatever. Also, don?t just rely on video evidence; if you?re lucky enough to live in or around Erie, go see him and his band, Eric Brewer and Friends, in one of their numerous regional performances. They do a pretty good job of keeping their Facebook page updated with the latest show info, so you should probably like this page.

A few years back, Eric Brewer was one of 10 finalists from across the country selected to compete in the 2008 Guitar Player Magazine Guitar Superstar competition. If that?s not intimidating enough, sitting there judging him were two notorious shredders - Joe Satriani and Steve Vai. If you?ve never seen Brewer perform, this video?s a great example of what he?s all about.

You may have heard about the Eric Brewer and Friends show at The crooked i on July 30. It wasn?t just any other show; it was almost two hours of nothing but Phish, everyone?s most favorite/least favorite jam band. If you weren?t able to make it to the show, someone calling themself ?CrAcKaMiKeL? posted five videos on YouTube chronicling the complexity of that performance. Crank up your speakers, click on the links below, and be sure to thank CrAcKaMiKeL, whoever he is.

As I told you in the cover story on Brewer, videos may be all we have to remember him by if he gets his way. ?I want to play,? he said. Here?s how he plans to make that happen.

?What Brewer and Friends is doing right now is?We?ve been gigging so consistently that we haven?t had time to develop our original material the way I would like. And the rest of the band agrees. We?ve all got ideas, we can all write stuff, and we like having a busy gig schedule. That?s how we feel we?ve improved and gotten to the point where we are, and being able to do what we do. It?s from gigging, from trial and error. Playing with each other, learning songs on the fly, learning songs right before a gig?but, I think because of our busy schedule, we haven?t had as much time as we?d like just to hone our original material?so that?s going to be our goal.?

?Our goal is to have a CD completed before the New Year. That?s our goal. And we?ve got probably half of the material we?d want for a CD, so we?ve got some writing to do, and I?m really excited to just take a little break and just do that. We?ve got a new practice space, and we?re going to have a full recording setup, so we?re going to be able to record all of our practices and all of our jams.?

Brewer will teach you, your kids, or your grandparents.

Brewer told me that his students have ranged in age from the very young to the very old. He filled me in on some of the challenges and rewards associated with teaching people from such a diverse age range.

?Luckily, 99 percent of the time, the kids are genuinely into it, so it?s not a situation like babysitting?Luckily, that?s pretty rare these days. Youngest I?ve had is maybe 4 or 5, which is really, really, young?I mean, I tell parents that, unless they?ve already shown a noticeable interest in playing, not just music, but playing?like if you get them a guitar and they are fiddling around, trying to make sound out of it?but if they?re 4 or 5 and their parents get them a guitar and it sits there, for a year, and then you get them lessons just because it sat there for a year, that?s probably not a good start, just because they didn?t show that interest. So in that case I tell the parents, maybe wait until they?re 7 or 8.?

?Right now, I?d say my average student is probably a 15-year-old guy, early high school age, been playing for a couple years; when they started they were quasi-serious about it, then they start to really kinda take off. That seems to be the most common age group. Because, somehow, some of the kids have heard of me, from the Internet, or I don?t know how. And then they?re like, ?Oh yeah, I wanna go take lessons from that guy,? so they show up and say, ?Hey, does that Eric guy still teach here?? It?s cool because they know that I can actually show them something. Sometimes kids are skeptical of you, they come in, and they wanna learn, and they see a younger guy, and they?re like, ?uhhhhh,? they look at you like you don?t know what you?re doing. So it?s good to have at least some sort of reputation around town.?

?I think the oldest I?ve ever taught is probably in their 70s. He had played, but it was kind of a situation where, he had messed around with it, for, you know, 70 years [laughs], but, I mean, the dude was retired, and he said, ?shit, I want something to do.? And sometimes those are the best students, the adults, because they want it so bad?They?ve got the job, and the kids, and the wife, and all the normal stresses of adulthood, and they want something to do.?

Brewer doesn?t want you hangin? round too long.

?I?ve had a good number of students who stick around for a long time. I?ve got some students who?ve been there from the beginning of when I started at World of Music. Probably four or five years. And that?s a lot of money! That?s a lot of money. But yeah, I?ve had people as long as four or five years, and it just blows my mind, that, you know? I always have something I can show them, but sometimes, it?s like, ?Alright, you?re good now, just go?go do something! Quit taking lessons and go join a band already!? I mean, I can always show them something new, but at a certain point and they?re kicking ass?that?s not the goal of teaching is to just want the person to keep taking lessons with you for their whole life or whatever. I want them to take lessons for as long as they need to, to get what they need to do what they want to do. And if they get those tools that they were looking for, and they start playing in a band, that?s what I want.?

?It?s a flat rate at World of Music, all the teachers are the same. I believe it?s like $17 a half-hour or whatever, which is dirt cheap, compared to?like if you go to Pittsburgh, it?s probably $30 a half-hour; if you go to New York City, it?s $100. So, $17, people even complain about that. It used to be $15 and they had to raise the price, you know, the economy is what it is. They raised the price and people got mad about it, but $17 is a good deal.?