Brewer's Army of the Dead Heads for the Rook 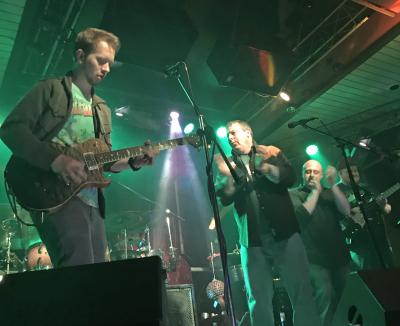 Late Grateful Dead bandleader Jerry Garcia is not the most immediate analog for local musician Eric Brewer's style of guitar playing, but audiences will hear the influence at Brewer's.

The Grateful Dead a lot of different things for a lot of different people. It's been more than 23 years since bandleader Jerry Garcia's death, and there are huge swaths of people who still listen to his music on a daily basis. Some of these people will be on stage one day this April at the King's Rook Club, and even will be in the audience. What day in April, you ask? Well, 4/20, of course. Eric Brewer, winner of Erie's Best Musician, will be leading his merry band of musicians for another highly anticipated tribute to the Grateful Dead. Brewer explained that "the response was fantastic last time and we were lucky enough to land the 4/20 date which we feel will create an even more heightened atmosphere to pay tribute to one of our favorite bands."

Known for his warm, often subdued playing technique, Garcia seems to be a less obvious influence on Brewer, especially compared to some other nights, when he's been known to mimic the likes of fellow redheads Trey Anastasio or Duane Allman. "Playing Jerry's style is very tough without just rote copying. I'm more interested in combining his signature style with a little of my own and using that concept as a vehicle for achieving improvisational transcendence ... or something like that," Brewer laughed. Brewer will be joined by his regular bandmates Ralph Reitinger, Charlie Meyer, and Steve Barone, with special guests like Joe Cieslak and Ron Yarosz joining throughout the night in the venue's Downstairs Concert Complex. — Nick Warren