Bridesmaids: Rosetta Stone of the Modern Battle of the Sexes

Bridesmaids: Rosetta Stone of the Modern Battle of the Sexes 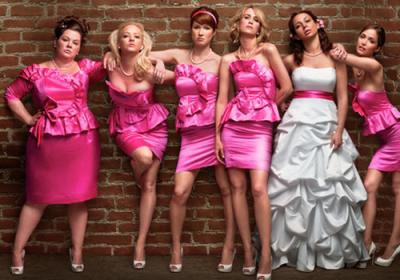 And after watching Bridesmaids, I'm one step closer to understanding that concept in all its universal implications.

See, guys run around all thier lives trying to understand women. Media suggests differently, but in ways, we're just as clueless about thier ways as they (for whatever reason) are about ours.

But (to the point) the truth is, I think many of us are clueless. And Bridesmaids, as innocent a vehicle of modern media entertainment debauchery as it pretends to be, it is, in my mind, the holy grail of contemporary intersexual insight. The Rosetta Stone of the Information Age. Battle of the Sexes decoded. And not only that, it's a testament to the real, and a middle finger to the ghosts of the goose-stepping domestic restriction of the patterns of the old guard and the bourgeoisie.

Whereas The Hangover is this drunken Sin-City adventure through the bowels of America's capitalist wasteland-- a true saga of postmodern manhood and a testament to the merits of manly brotherhood and masculine perseverence--Bridesmaids was a hellish romp through the rose-scented, yet thorn-littered depths of the trials of the Gen X-Y woman.

It's rife with humiliations based on the downfalls of relationships, shattered mirages of hope, support, and security, and the true cornerstones of feminine ego--Not vigor, tail, or accomplishment (at least not as top priorities), but beauty, romance, security, and maintaining love and connection--With a best friend.

Bridesmaids wasn't about overt bluntness, piggishness, arrogance, or action (Not mostly). It was full of subtlety, romance, nuance, and odes to the overwhelming power of spiritual support and genuine friendship.

I've wondered about you broads for a while, and probably always will. But in a way, after this film, as of now, I can say, in some way, that I truly get it. I laughed, I empathised, related, was entertained, and... well, came away with  a little something more. Much more than I expected to.

And I know, that even as my fave action heroes may have braved epic showdowns with raised fists and monster explosions, that the battles of the American female, though maybe faced in bridal shops over candied almonds, fought over glitter, dresses and dinner invitations, rather than killcounts, bragging rights and swagfuel, are not only just as intense, just as harrowing, just as suspenseful, and just as important, as the final romp between Swarzenegger and the other guy, or Stallone, or Megatron, or whoever, but just as broad, just as real, and just as crucial to the human experience.

Ladies, after this, I'm respectfully raising my beerglass. Cuz after Bridesmaids, I see a Gladiator in you, who is just as real, just as courageous, and just as fierce and determined as myself, if not more.