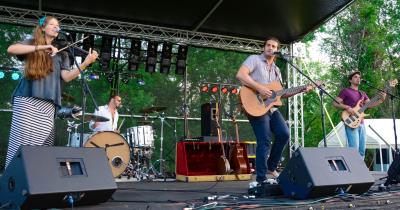 Cambridge Springs' Riverside Inn was the kind of place that welcomed invitation. There was a certain magic to it that brought people together — a lot like music. Musicians, forever seekers of the "right vibe," often found it within the cordial Victorian-era building, tragically lost to fire on May 2, 2017. Enough artists expressed an interest in playing there that it spurred the idea of a concert festival.

The Riverside Music Festival, which debuted in 2011, was essentially built around the rallying cry "let's get together and jam," according to Justin Moyar, one of the event's original organizers. "We wanted to put that on steroids."

The inn had finished hosting its seventh festival less than a month prior to its demise — three stages nestled within the historic structure another at the nearby Villa Restaurant and Lounge.

However, Moyar, a passionate supporter of his hometown, refused to let the music die with the building. Thus emerged the Cambridge Springs Music Festival, the outdoor successor to the Riverside Music Festival.

Yes, it would be impossible to recapture the Riverside's air of enchantment. "People just showing up organically and jamming? There's no replacing that, because the Riverside was the type of building that it was," admitted Moyar.

But at the same time, the inn had its limitations. Approximately 300 people squeezed into the Riverside's Victorian Room to watch the festival's main act in 2017. At last year's inaugural Cambridge Springs Music Festival, the headlining performance was attended by 700. "There was definitely an increase in the number of people," observed Moyar.

Although the first Cambridge Springs Music Fest was a success, Moyar believes that he has laid the groundwork for future events with this year's sequel. The Cambridge Springs Music Festival will host music on three stages — the main stage downtown at the carnival grounds (the Bush Investment Group or "B.I.G" Stage), one at the newly opened Riverside Brewing Company (on the site of former Riverside Inn), and the Villa Stage (reprising its role as the home for louder, rowdier genres such as punk and metal). Mugs and Muggles, the Harry Potter-themed cafe and 2018 Best of Erie award finalist for "Best Coffee," will be the home of the Crazy Monkey Kids Zone (hosted by Edinboro's Goodell Gardens). On Saturday afternoon, songstress Brooke Surgener (as Ariel from The Little Mermaid) and balloon animal savant Magic Steve will entertain the youngsters, while an inflatable slide, bounce house, and obstacle course will allow them to expend some energy.

While the town of Cambridge Springs and its economy continue to evolve, the festival's commitment to musical diversity will never waver. "Unlike other festivals [throughout this region], we want to be a home for all types of music," said Moyar.

Acoustic singer-songwriters, metal and punk bands, Delta blues, and even Latin music (a rarity for Crawford County) will all have an outlet at the Cambridge Spring Music Festival. The emphasis, as always, will be on original music. However, there are a couple of tribute performances — Chestnut Grove playing a Beatles set on Thursday and The Erie All-Stars channeling Tom Petty on Friday — on the bill to broaden the appeal and get more people listening. "I want to create an environment at this festival," Moyar expressed.

Ultimately, Moyar hopes that the Cambridge Springs Music Festival can be the same kind of cultural and economic stimulus for his small town that the GrassRoots (Ithaca, N.Y.) and  Launch (Lancaster, Pa.) festivals have been for theirs. "This is really targeted at bringing awareness to and helping the economy of Cambridge Springs. I've seen it transform other towns."

The response has already been encouraging. "This town's super resilient. Nothing has ever stopped us from trying to carry things out." The show, as ever, must go on. — Matt Swanseger