Death Wish Brings Back Middle-Aged Vigilantism … but is it Welcome? 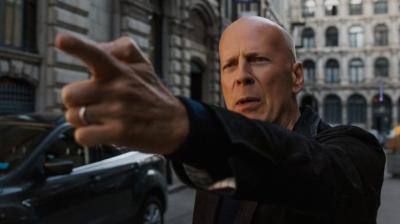 In the '70s and '80s, the urban vigilante film was unstoppable. Whether complex character study, simple wish fulfillment or both, stories of men with nothing to lose taking on the scum of the streets dominated both multiplexes and grindhouse theaters alike. Now Eli Roth's (Hostel, The Green Inferno) remake of Death Wish brings back that old vigilante feel and the results are … troubling to say the least.

Based on the novel of the same name, Death Wish is the story of Paul Kersey (Bruce Willis), a pacifist doctor who turns to murdering criminals after a break-in leaves his wife dead and his daughter comatose. Kersey's rampage leaves criminals terrified, the police baffled and ordinary citizens cheering him as a hero.

The controversial 1974 original had some interesting things to say about the ethics and problems with taking the law into one's own hands (that is until the Golan-Globus team turned the sequels into right wing cartoons). This remake, while paying lip service to that same moral dilemma is too obsessed with giving us pornographic shots of graphic violence and juxtaposing Willis's crimes with rockin' AC/DC music. The fact that this film was released in the wake of a mass shooting isn't the film's fault, but it reveals the cluelessness on the part of the filmmakers. The whole thing is made to make the audience cheer and in this time where the ethics of responsible gun ownership is a regular debate, I don't think a film about a guy using a gun to solve his problems is really something we should being cheering for. — Forest Taylor

by Nick Warren5/20/2020, 12:22 PM
One of the best albums in recent memory, My Heart is a rapturous, emotionally captivating album from start to finish

by Aaron Mook5/20/2020, 12:13 PM
Where The OOZ felt dreamlike, Man Alive! sounds downright nightmarish for most of its duration.