Using theater to interrupt the cycle of violence in Erie. 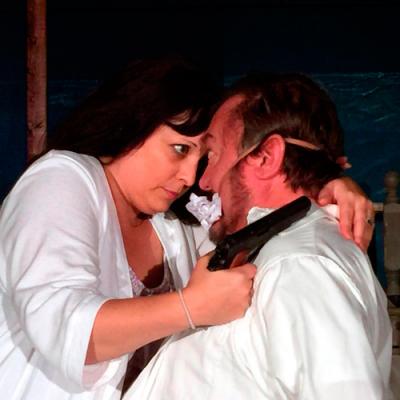 Some say that guns don't kill people, people kill people. Others say removing the guns from the streets will reduce violence.

I don't believe either is accurate. What people think and how they think kills people. Although emotions play a role, especially in individuals who have Post-traumatic Stress Disorder (PTSD), the defining factor is the way people act on their emotions through the "what" and "how" of their thoughts.

The "what" is the content; whereas, the "how" is the thinking that can be toxic: faulty reasoning, illogical statements, and cause and effect reversals.

Now people who run in the same circle will most likely think and act similarly. Viewing the same TV news shows, listening to similar radio reports, or interacting with related websites, results in comparable thoughts and behavior. Likewise, imbibing at identical bars and clubs, frequenting the same social events, and standing on the same street corner repeatedly leads to groupthink. There is no novel input. Each individual is constrained within a closed, stale system.

Presently, Erie's anti-violence action plans are products of that sort of a system. They're not solution-oriented. They are mechanisms of containment and control: curfews, gun buy-backs, and reallocated police presence.

Thinking and consequent emotions and actions need to be the target of intervention. Yet, is this enough to alleviate our epidemic of teenage violence? Regrettably, not all teenagers are capable of change. Traditional legal methods need to be used with those individuals.

Fortunately, there are also those who overcame obstacles to become role models. One individual who spent many years in prison became a leading expert on combating addiction and criminal thinking. Another grew up in the worst, most violent, and gang infested area of South Chicago and became a successful law enforcement professional.

How might a person's thought processes be changed? One way is through therapy; however, this is an unwieldy and inefficient method to reach numerous people. Moreover, it is not just the gun-toting teenagers whose cognitions need altering, but the citizenry in general. One-dimensional media in all its manifestations needs to be transformed. Stirring up emotions does not inspire solutions. Neither does investing in outrage, maligning others, and further divisive activity.

Could theater change a person's mindset? Our society, in general, focuses on book learning. Yet teenagers learn predominantly through action and play. They model others on the street corners. They repeat thoughts and behaviors of those they value. It is lock-step groupthink. They are acting out a play within their play.

Might not a solution be writing, practicing, and performing original scripts?

Who can write these plays? Our teenagers.

Who can act in these plays? Our teenagers.

Who can learn from these plays? Everyone, but especially our teenagers.

Plays by teenagers susceptible to violence could be performed in a theater or, naturally, at our parks, many of which are seldom used. What are the implications of creating such drama? Resolution, change, and release. These dramas are commonly used within prison programs, called "Therapeutic Communities." Although this approach has not been tested in Erie, now would be a fantastic opportunity to attempt it in our community.

There are so many serious manifestations of violence that could be presented through acting, a natural storytelling form where everyone can learn. Of all arts, theater is the most direct route to human thoughts, feelings, and actions.

One play with the needed intellectual and emotional resonance is Calling the Moon, which I saw at PACA last May. This play was written and directed by Margo Wolfe to cope with the thoughts and actions of a distressing violent suicide. Another, Death and the Maiden, presented in October by All an Act Theatre Productions, featured only three actors. Its theme is best summarized by an unanswered question: "Can the psychological damage of torturous rape only be purified through revenge or does paranoia take an intractable mental foothold?"

On the streets of Erie, many teenagers consider being "dissed" a traumatic insult that demands killing as revenge, regardless of the speaker's intent. But conflict can be transformed into an opportunity for compassion through interaction instead of reaction. Through slow thinking instead of fast thought. By viewing commonalities instead of contrasting differences.

Consistent, healthy, and frequent parenting would, of course, make many of these interventions unnecessary. Loss, trauma, and a stress-filled environments can be surmounted by nurturing attachments.

In the meantime, this is a "Call to Solutions" for brainstorming sessions, partnerships, and action. None of these changes will be instantaneous or easy.

Ending violence depends on you, me, and our Erie community: being indifferent or involved.

David Szymanowski is a writer living in Erie and a frequent volunteer with the group Pennwriters.