Bugs Bunny at the Symphony is What's Up, Doc 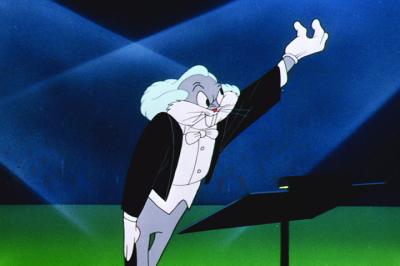 If you signed up for middle school band in the General McLane School District circa 1997 (as I did), you no doubt played your way through a handful of cacophonous concerts, which very likely included a wheezing, screeching version of "The Merry-Go-Round Broke Down," the famous introductory music to the Looney Tunes cartoons. It was the perfect kind of song for seventh and eighth graders to take on, with a goofy, recognizable melody and enough of a challenge to keep things interesting.

One has to wonder if any of the musicians in the Erie Phil have had a similar experience, and now find themselves remembering those early instrumental days as they prepare for Bugs Bunny at the Symphony: 30th Anniversary Edition. Material that could be arranged into simple grade-school concert band-friendly fare is also full orchestra-worthy, with classics akin to the aforementioned "Merry-Go-Round" and the equally recognizable "Merrily We Roll Along," both of which evoke instant memories of Saturday mornings and sugary cereals.

This is the world premier preview of the concert, and audiences will actually be — as the Erie Phil website declares — "the very first…on the planet to see this new edition." The performance features 16 classic Looney Tunes cartoons on the big screen with the Erie Phil performing the original scores live.

The original Bugs Bunny at the Symphony was created by composer George Daugherty and entertainment producer David Ka Lik Wong in 2010, with a second version of the performance premiering in 2013. Now in 2019, this latest incarnation of the Wascally Wabbit's musical evening will make its exclusive debut in Erie with none other than George Daugherty at the helm as a very special guest conductor.

There are only two opportunities to catch Bugs Bunny at the Symphony, and tickets are selling fast — Road Runner fast, at that. — Cara Suppa