Cardboard boats? There's a regatta for that! 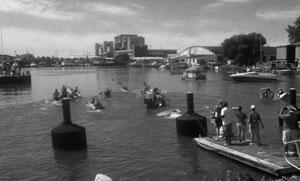 Saturday, Aug. 16, the Bayfront Maritime Center (BMC) will host its 5th Annual Cardboard Boat Regatta in the East Canal Basin behind the BMC campus – a spirited competition, which allows for only a predetermined number of tools and a fixed build time where families, student groups, and teams of friends or co-workers are invited to pool their creative building skills in an effort to compete for numerous awards.

As for the challenge? Participants' cardboard boats will be put to the test in hopes of not flooding or sinking through a 300-yard race in the East Canal Basin.  Boats will race in heats based on the age of the crew and length of the boat from one side of the Basin to the other and back and judges will pick the winners. There will be a parade prior to the races at 11 a.m. and the races will kick off at noon. Registration is $35 per boat and proceeds support hands-on maritime programming in Erie. Prizes will be awarded for fastest time, most creative boat, most dramatic sinking, and, of course, the crowd favorite.