An interview with the creators of the new game. 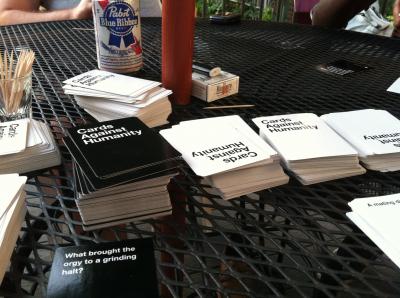 We've grown up into a world where being a nerd and having shameless passions is totally acceptable. Cards Against Humanity, "A party game for horrible people," reeks of total shameless passion. I reached out to the creators to find out more about how this hilarious game was made and the people behind it. Fortunately, they are incredibly engaging with anyone interested in their game.  So on a Sunday afternoon, sitting in his car on the side of a highway outside L.A., Ben Hantoot called me.

Most people will say that there are similarities between Cards Against Humanity and Apples to Apples, a game that many people already know and play.  Ben told me, "We didn't set out to create a clone of Apples to Apples, but it does have the same basic mechanic where you have a hand of cards and you match to a card in the center."  However, the writing in Cards Against Humanity is leagues above that simple noun and adjective relationship found in its childish counterpart. "Everyone thinks it's so easy. It's harder than it seems. Especially writing black cards that function grammatically with hundreds of different phrases to fill in that blank." Each white and black card in Cards Against Humanity has the ability to draw on a multitude of contexts and narratives.

A testament to how well written the game is comes in a house rule that is printed in the small instruction book packed in box.

" Every round, pick one random White Card from the pile and place it into play. This card belongs to an imaginary player named Rando Cardrissian, and if he wins the game, all players go home in a state of everlasting shame. "

The worst part is, Rando is really damn good. This guy has almost won over half of the games I have played, and he isn't even real. It creates this wonderfully awkward moment. Everyone glances around to see who played that hysterical and despicable white card. Quickly realizing that an imaginary player is better at the game than they are.

Ben is one of several co-creator and writers behind Cards Against Humanity, but is also a designer and production manager or the game. The creators of the game have been friends since middle school. He described themselves as a shameless group of total nerds.  A group that played a lot of computer and board games.  Ben even admitted that they were the guys who created an improv club while in high school. That background made them want to develop a game that had the same ease as their childhood favorites like Werewolf, Dictionary Dabble, and Eat Poop You Cat, but with their own blend of humor and for their adult selves.

Their first attempt was a game called Hyper-theticals. They wrote down a bunch of "absurd" questions. One example that Ben was able to recall, "What would Jerry Seinfeld say while he was raping you?"  The players would write a response and submit anonymously to a judge, who would then try and match the response to the player. In Ben's words, "It kinda bombed and wasn't really fun."  In 2009, they took a lot of stock from Hyper-theticals, this time they wrote down absurd responses to the absurd questions. And that was a total hit.

Ben and the creators felt they had something and continued to work on it. They named it Cards Against Humanity. Originally, the game was made available under Creative Commons, allowing anyone to download and print off their own deck for free. While it was up for download, Ben said, "...we all got together over the summers, all the time, probably 2-3 times a week and worked on the deck. Finessed the questions, finessed the answers, and added the fill in the blank cards about a year into it and after the game had been available for about two years online, we ran a Kickstarter." The Kickstarter was posted with a deadline of January 30th 2011. The total funds asked for was $4,000. They raised an astounding $15,570 from only 758 backers.

Since the initial Kickstarter campaign the game has become a complete success selling in the range of 50,000 copies, and that's with only being available to purchase for a total of five days since November 2011. Despite having a retail product available, you can still download the Creative Commons version of the game. Ben said the experience they've had is this: people get to try the game out for free with their friends and end up liking it so much they want to go out and buy it. He doesn't feel like they've lost a single sale because of that. It's the right balance of being free but not easier than buying the professional product.

Ben says he's enjoyed seeing the game that he and his childhood friends created as a means to keep in touch become popular. It has resonated with nerds and geeks across the Internet. Leo Laporte hates it. Kristen Bell apparently loves it. A drunk guy broke his buddy's house over it. The duders over at Giant Bomb have taken to the game so much that they've played it twice on their branded Thursday Night Throwdown. Host Ryan Davis invited members of the CAH team to guest on their weekly podcast. Ben said that a large bump in CAH's popularity has come from the Giant Bomb crew, and he has nothing but thanks and praise for their team.

Everyone has played board games growing up. Why are we now seeing this resurgence? Ben and I briefly talked about the recent growth in indie board game popularity. Ben suggests that people are getting tired of the stagnating nature of "AAA" video games and the ubiquitous cover based shooters and are looking for alternatives. Previously you asked your friends. Now you ask the Internet. Various Internet communities are a macrocosm of your nerdy high school Scrabble clubs. Today, they are adults with a sense of humor and the ability to purchase alcohol.

Ben jokes that their team are self-proclaimed nerds.  However, they've created a game that everyone enjoys.  It's pretty awesome that a bunch of dudes can get together and create something and have it become a phenomenon.  No matter what you're doing it's possible to find your audience.  It's possible to take your passions, share them with others, and thrive.

Previously featured on here at BigSushi.fm

Board Games are Back

by Erie Reader Author10/25/2012, 1:08 PM
John Lindvay sat down with local gamer Scott Mellon to talk board games past and present and Erie's Day of Games, which happens October 26 to 27.