Cash Rules Everything Around Me

Sorry to Bother You is Bizarre, Hilarious and Brilliant 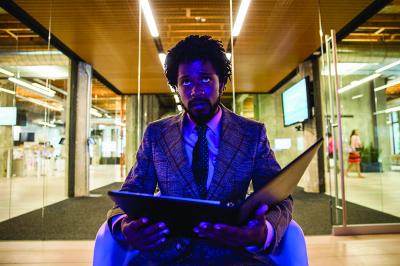 As someone who worked for one agonizing month in a telemarketing job, I welcome any story that seeks to poke fun at that particularly nightmarish experience. The beginning of Boots Riley's Sorry to Bother You seems like it's going to be just that story, but it soon becomes apparent that the film is after something far grander. I thought we were getting a simple workplace comedy; instead we got a wickedly smart, deliciously surreal film that ended up being the most entertaining satire of capitalistic society since John Carpenter's They Live.

The film stars LaKeith Stanfield as a young man named Cassius Green (Cash for short … get it?) who takes a job at a telemarketing company just as a way to get himself out of his rut and hopefully move out of his uncle's garage. The work is sleazy and dehumanizing, bothering people on the phone to sell them useless crap in order to pay his rent, but he's constantly told that if he does well, he may get a chance to become a so-called "Power Caller." Soon Cassius finds himself in the middle of sinister company whose secrets have to be seen to be believed.

The film works brilliantly as a cross between a working class comedy and a beautiful slice of absurdism (think Office Space as an episode of Black Mirror). But it works best as a social satire of our world: a greedy, upward-mobility obsessed world that is killing us all. Some may argue that the satire is sloppy or unfocused, but in these times I think it's the perfect shot of insanity we all need. — Forest Taylor

Food Insecurity Crises At Home And Abroad: Why Biden Must Lead On Both

Free Public Panel on Discriminatory Banking and Housing to Be Held