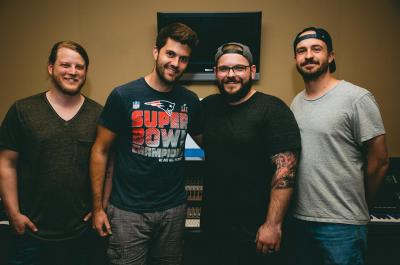 The members of Lights & Letters (left to right: Sam Krahe, Grammy-winning producer Jonathan Crone, Dave Perkins, and Bradley Perrine) invite you to Basement Transmissions to celebrate the release of their debut EP, Tell Me.

On Black Friday, local indie-pop players Lights and Letters will be releasing their debut EP, Tell Me, and they want you to be a part of that release. Performing alongside singer-songwriter Josh Travis at Basement Transmissions, the band is offering a special admission package to the show that includes your choice of a digital or hard-copy of Tell Me, a limited edition t-shirt, and treats during the show courtesy of the recently-opened downtown bakery Cake Zen. A "Just Supporting" ticket is also available to those who cannot attend, but would still like a copy of the EP and a tee.

Vocalist David Perkins explained to me what listeners can expect from the band's first official release, citing the record's "straightforward indie-rock with upbeat and synth-driven moments throughout." Says Perkins, "we're not trying to reinvent the wheel with our sound. We want people to enjoy the music, but we also want them to feel something … blame, doubt, [and] regret are common threads throughout the EP, with the goal of challenging and pointing the listener towards the hope that can be found in life."

Perkins is the first to admit that Josh Travis is a left-field choice to open the show, stylistically speaking, but finds a connection in the way he writes.

"Josh is an incredible songwriter," says Perkins. "The imagery and honesty in Josh's music has always resonated with us, and it's those same feelings we hope to evoke through our songs."

All in all, Perkins feels grateful to be entering Erie's music scene, and hopes the band's future will see them becoming a fixture of the community.

"We've been playing music for a long time, but are relatively new to the arts community in Erie. We have a lot of friends who are very active in the local music scene and have been for a long time. We're looking forward to learning and collaborating with those friends, and hopefully making some new ones along the way." — Aaron Mook