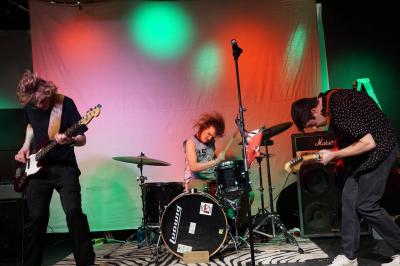 They say all good things must come to an end, but luckily for us, Erie's favorite psychedelic trio is only moving a couple hours away — and they'll be gracing us with two final shows before they do. After that, a long-anticipated full-length seems imminent.

"We're really moving in order to play more often," says drummer Ben Hyman. "Erie has shown us love, but frankly, we're bored. Once we settle in, we will record."

The first of these two shows will take place at 9th & State Beer Cafe, where the band will perform alongside Glasswing. This free show is taking place during Roar on the Shore, so pandemonium is practically guaranteed. Guitarist and voice of the band Cameron Fish elaborates on the band's love for Erie and reasons for traveling.

"During our time within the Erie music scene, we have not been entirely understood — especially in the early days," says Fish. "We do not mind. It's one of the many things that holds us together, and pulls our fans closer. What we hope to find in Pittsburgh is what we've found in Erie, and that's a passionate fan base and a strong community."

Wave Trails' going away party and final hometown performance (for now, that is) will take place at Jekyll and Hyde's, one of the band's self-professed "favorite places in Erie." There, they will take the stage with picaresque septet The Stormalong Scoundrels, playing to a crowd longing for one more chance to say goodbye. In keeping with appearances, Wave Trails' only request is that you "don't break anything this time." — Aaron Mook