Historic Chautauqua Amphitheater named a National Treasure in an attempt to save the site from demolition. 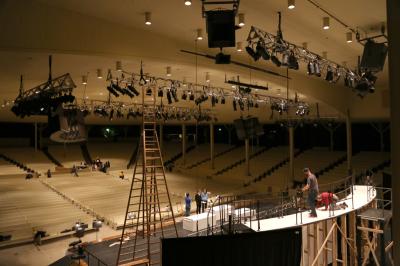 If you've ever been to the Chautauqua Amphitheater you know that it's a special place. Sitting in the wooden pews and listening to a lecture or musical presentation, you can't help but feel the 122 years of emotional resonance flow through the open air.

It's hosted presidents, musicians, activists, religious figures, and so many more. But it's become the site of some criticism as the Chautauqua Institution prepared to renovate, renew, and, in that process, replace the historic amphitheater with a replica.

Preservationists were up in arms. How could the Institution's prestigious board of directors be so short sighted, they asked?

On Tuesday the National Trust for Historic Preservation took the greatest leap it could to preserve the amphitheater by declaring the site a "National Treasure."

"There are many significant cultural historic sites in America, but there is only one original Chautauqua Amphitheater," said Stephanie Meeks, president and CEO, National Trust for Historic Preservation. "The plan to demolish the Amp would tear at the heart of Chautauqua, and compromise the historic character that many Chautauquans and visitors from around the country deeply value.  It also threatens the National Historic Landmark status of this nationally significant place."

The 4,000 seat amphitheater was built in 1983 and has been home to many important cultural events, including Franklin Roosevelt's "I Hate War" speech in 1936.

The future of the amphitheater remains in question, but Tuesday's announcement must be viewed as a significant step toward its preservation.