The inner contents of Apocalipstick might be slightly gloomier than the cover art implies, but not by much. 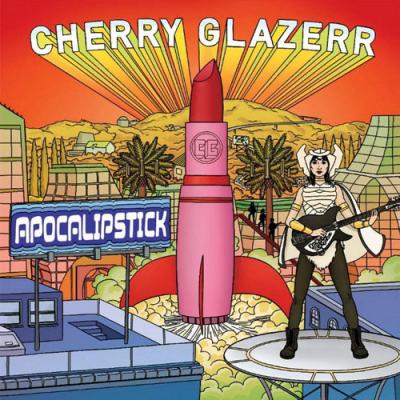 The inner contents of Apocalipstick might be slightly gloomier than the cover art implies, but not by much. Hailing from Los Angeles, the trio, fronted by singer/guitarist Clementine Creevy, offers up its sophomore album. The 20-year-old Creevy is a model and an actress, and may be recognizable from her stint on critically acclaimed Amazon series Transparent, where she led the fictitious bands known as Glitterish and Fussy Puss. The lo-fi, garage quality of 2014's Haxel Princess is traded in for a more polished rock sound. The shift is not altogether surprising (nor drastic), since two-thirds of the band have been replaced since then, welcoming Tabor Allen and Sasami Ashworth on drums and synthesizer, respectively. Overall, the record has an endearing fuzz-pop sound that's ideal for fans of Colleen Green or Ringo Deathstarr. There are moments of humor, most notably in "Trash People," with lines like "we wear our underpants three days in a row." Aside from that, there's an inviting darkness contained here. Youthful energy abounds in tracks like "Instagratification" and "Humble Pro," paired with the sincere delivery of songs such as "Nuclear Bomb."