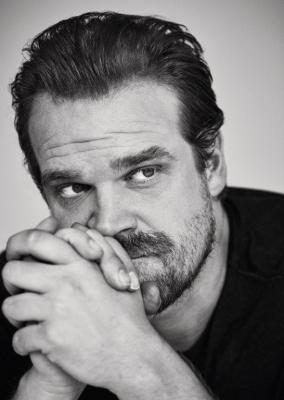 Okay, David Harbour probably won't actually dance. (I mean, he might if we ask nicely enough. But probably not.) The actor (in case you haven't turned on your Netflix for a few years) is now best known for the role of Chief Jim Hopper, the curmudgeonly, waffle-providing, Upside Down creature-battling police officer of Stranger Things, Netflix's break-out '80s-nostalgia sci-fi insta-classic. For the role, he has been nominated for an Emmy, Golden Globe, SAG and Critics' Choice award — and there have only been two seasons so far.

Harbour's career is absolutely lighting up, with the actor going viral on numerous occasions, such as when a still from the upcoming Hellboy was released; when he won the Super Bowl (the ad race, anyway) with his multi-scene Tide commercial; and when he showed off his dance moves for Eleven in Season 2 of Stranger Things.

Most of the audience in attendance for the opening of the Penn State Behrend Speaker Series likely did not grow up in a laboratory, so they will probably already know how well to bust a move to some sweet tunes. But really, David Harbour, feel free to give us all a refresher. — Cara Suppa