Choices, Interpersonal Communication, and Comedy on the Beach. With Giant Lizards.

Take a play, throw in the absurd, symbolism, fantasy, and two giant lizards if you want an idea of what Seascape is like. 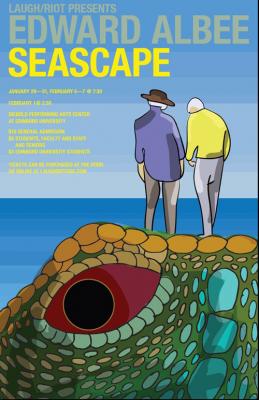 A human couple, sitting on the beach, stare into the long abyss of retirement and argue. Not so unusual, but things turn strange quickly in Edward Albee's Seascape when two fantastical human-sized lizards appear to them; a couple facing a crisis of their own, having found that they are no longer comfortable in the water (must be water monitors of some sort). Their ensuing interactions are awkward and confused, poignant – and yet, funny.

Foibles are revealed, motives questioned, and, eventually, a sort-of happy ending occurs. According to its website, Laugh/Riot Performing Arts Company is presenting the show as a biting comedy, although it earned Albee his second Pulitzer Prize for drama in 1975. With many of Albee's plays, there is often a fine line between the two. Throw in the absurd, symbolism, and fantasy, and the result is some very good theater.

"Seascape reminds us that we all must face our own mortality sooner or later," says director Shaun Taylor. "This play uses a fantastic intersection of a human couple with their reptilian counterparts to point out the choices that we make in determining our own destinies."

The play features Ben Robson and Jessie Connick as the humans; and Jordanna Wallace and J.D. Mizikowski as the lizards. Mizikowski is excited to perform in this production, saying, "It's fantastic that we are able to do one of America's greatest living playwrights. From Albee's The Goat or Who is Sylvia? to  Zoo Story there are few who do high comedy as well."

Laugh/Riot is in residence at the Diebold Performing Arts Center at Edinboro University this season, which gives it a solid platform for the production of this quality material.  The troupe features a mix of community members and students. Look for a New Works Festival in February and  Through the Looking Glass in April.

There aren't many playwrights who can move you with comedy, not to mention giant lizards. Edward Albee is one of them.