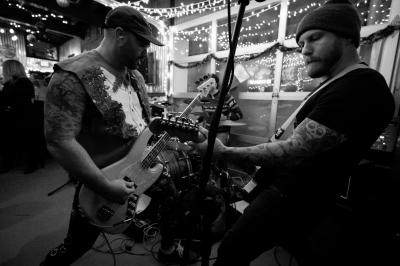 Jess Taylor
Join Half Glass, along with a number of favorite local rockers, for their second annual Half Glass Christmas with Class show in the Bunker at Lavery Brewing Company to benefit Erie DAWN.

Lavery Brewing Company is hosting the 3rd annual "Half Glass Christmas with Class" concert in their Bunker with some of Erie's finest indie bands joining together to raise money for a good cause. Half Glass, Mallory Run, Penny Racer, and Brooke Surgener are set to play, with the proceeds from the cost of admission being donated to Erie DAWN. The holiday season is one of giving and Erie DAWN is an organization that has been helping those in need for decades. This event's proceeds will help the nonprofit achieve their mission of continuing to provide services and housing for low-income women and children, one it has been working toward since it was first organized in 1995. Since that time, Erie DAWN has helped over 1,000 local women and children secure these services.

Bringing holiday cheer to the stage will be Brooke Surgener, who recently released her full-length album Moon Waves; she performs indie-pop songs for the whole family. Joining in the reindeer games will be Penny Racer with their tongue-in-cheek pop punk songs, followed by the eggnog-swilling elves in Half Glass who lean into their garage punk sound. Mallory Run will wrap up the festivities with their heavy riffs and brash vocals. This emo rock band from Edinboro has been on the road more than Santa, touring extensively since forming in 2015.

The first 20 people through the doors will receive their first drink free, courtesy of Half Glass, so plan to get there early. And with all the magic in the air, the not-so-secret Santas at AMATECH Inc. have agreed to match up to $250 from the money raised for Erie DAWN. Enjoy an evening with good music to hear, while drinking some local beer, and spreading holiday cheer.