Jamestown embraces its cultural heritage and laughs all the way to the bank. 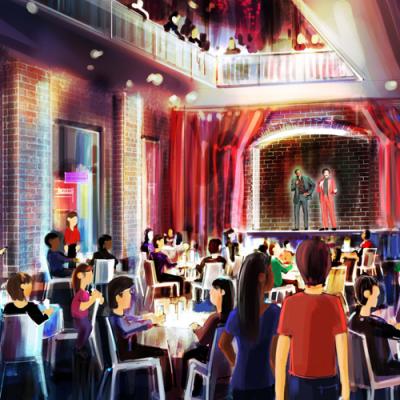 Driving over the Chadakoin River in Jamestown, N.Y., on the Washington Street bridge, a sign greets you, welcoming you to the future site of the National Comedy Center.

Once you cross the bridge, however, you'll find another sign – a billboard testament to the comedy roots borne of the region's soil: a mural, with the smiling faces of television's I Love Lucy: Lucy, Desi, Frank, and Ethel, gazing down upon the river and the city.

Lucy, of course, is Lucille Ball, a native of Jamestown and a goddess of sorts when it comes to comedy, women, and the town in which she was born. And Lucy had a dream.

"She would love for her hometown to become a destination for the celebration and cultivation of the comedic arts," says Journey Gunderson, executive director of the National Comedy Center – the establishment that is helping make Ball's dream a reality.

Set to open in 2017, the National Comedy Center is an extension of the annual Lucille Ball Comedy Festival and the Lucille Ball-Desi Arnaz Center for Comedy. Ground broke on the $50 million project last summer. When it's completed, the National Comedy Center will be a state-of-the-art venue: part living museum and part entertainment venue, with something for everyone. That is, if you like to laugh.

The center is expected to be home to about 70 different exhibits – everything from the earliest written jokes to examinations of how the Internet has changed comedy.

"Everything you can imagine is covered," says Gunderson.

But this is not a static museum experience. "Certainly, it's very media-based," Gunderson says, including a hologram theater that allows patrons to experience stand-up sets from famous comedians throughout history. Gunderson says the center is working to secure rights to holo-cast performances from Red Fox and Andy Kaufman, for example, and "you'll be able to relive what it must have been like to see these performances in person."

The idea is for the center to be a participatory experience; right when a person walks in, he or she will be given a bracelet or a badge containing a computer chip that will – with the help of some basic questions and answers – tailor parts of the experience to personal senses of humor.

"It's designed to be customizable, but this is also a chance to learn," Gunderson says. "Say you really like political comedy, but you might not know about George Carlin. Part of these exhibits are tracing the history of [comedic genres] and making connections."

Beyond the high-tech, some interactive exhibits will be of the old-fashioned variety. People will have a chance to see what a writers' room is like for a sitcom, or try their hand at improv, for example.

"This is a place where you will learn about the greatest artists and their contribution to comedy, but also come away with a greater appreciation for their process itself, because you've had the opportunity to experience the process," says Gunderson.

Beyond being a tourist attraction, the National Comedy Center is expected to bring in $20 million annually. It will be a boon to the local economy, but Gunderson also expects it to enrich the lives of people in the region culturally.

"The level of programming that we've brought here via the annual festival is of the caliber that is seen anywhere in the world when it comes to comedy," she says. "When this comes to fruition, the vision is a calendar year of that caliber programming."

The programming of the festival is already top-notch. When ground broke last summer during the festival, comedy legends were on hand – people like Jerry Seinfeld and Regis Philbin.

"It's important to me to make the festival a microcosm of what the center will become," Gunderson says.

And because of the mild winter, the foundation for new construction of the center is already completed, and construction will pick up again in the spring. The National Comedy Center will be made up of three different buildings – two of which are already in existence: the old train station and the former trolley garage, both situated on the riverfront.

"The adaptive reuse of two existing buildings is a great aspect of this," Gunderson says. "It will bring new life to the waterfront."

The National Comedy Center will ultimately serve as a heretofore nonexistent headquarters for the celebration of what comedy is, and what it means.

Local developers are already envisioning the center as a springboard for a Jamestown revival. Last month, AECOM Technical Services Inc. presented findings from a study conducted, envisioning the town's future. The findings weren't a plan, per se, but "a menu of options" the town could pursue, AECOM's Linda Cheu said at that meeting – options that included rehabbed parking, restaurants, and public gathering spaces.

And the state is taking notice of this potential. Empire State Development awarded $1.5 million to the project in 2014; the state recently awarded the National Comedy Center another $2.025 million, with $525,000 dedicated to marketing as part of Market NY's I Love New York campaign.

"[The additional funding] is a clear indication of the state's belief in and support for the National Comedy Center," says center chairman Tom Benson, "and that the partnership that we established last year is strong and long-lasting."

A vital part of the area's future, a fruition of Lucille Ball's dream for her hometown – these are the promises the National Comedy Center holds. More than that, it will ultimately serve as a heretofore nonexistent headquarters for the celebration of what comedy is, and what it means.

"Comedy is not widely accepted as an art form," Gunderson says. "When you look at a stand-up comedian, they're the writer, producer, director, and performer all in one. It's time comedy got the recognition as an art form it deserves."