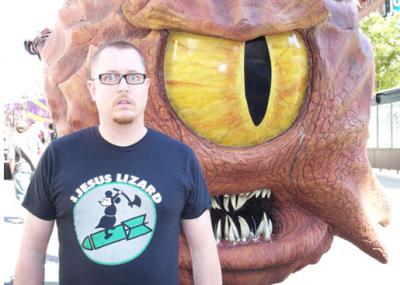 It's usually easy to know what to expect at Basement Transmissions – a handful of bands that your parent's probably wouldn't like followed by a day or two of ringing in your ears.  Sometimes it's an acoustic act, a local punk band, or a national touring metal group, but despite the genre or popularity the general formula is one band after another, after another, and so on.

But on Oct. 27, another element will be added to the show formula: a comedian.

Self-described "punk comedian" JT Habersaat will be making Basement Transmissions one of the stops on the aptly named Altercation Punk Comedy Tour, with other stops being made at Fun Fun Fun Fest and Hell Yes! Comedy Fest in New Orleans.

"When I get the chance to bring anything out of the ordinary to BT, I jump at the chance," owner, Bob Jensen says.  "The Altercation [Punk] Comedy tour was presented very well so I grabbed it up. Normally I just leave comedy to JR's because the do such a wonderful job, but this show is designed for my audience."

Jensen also expressed interest in bringing other out-of-the-ordinary acts to BT, including circus sideshow performers. "In the future I would love to see some body contortionists," he says. "Anything that entertains!"

Supporting acts on the bill are Tennessee horror-punks The Coffin-Bangers and Erie's own Mala Sangre, who's Halloween-inspired sets will set the mood for both the season and the show.

Basement Transmissions is used to doing things outside of the norm, and it's possible that this show might start a trend at BT of doing things unconventionally, even by their standards.