Coming Through In The Clutch

Why Gears and Grub is the Must-Attend Event of 2017. 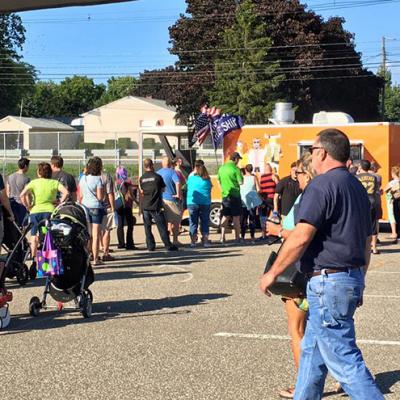 Many will recognize Roar on the Shore as one of the biggest events Erie has to offer. But surprisingly, until last year, this celebratory weekend had ignored one large niche in particular: local vendors.

Before we go any further, let's not get it twisted: Roar on the Shore is an amazing event, one that is impressive in both scale and scope. But it also seems to ward off as many locals from the downtown area as it draws in. Last year, Emily Smicker, event planner at the West Erie Plaza, decided it was time to offer a little taste of Erie during this incredibly popular weekend.

There was no place for local vendors to go during the biggest tourist weekend of the year. We figured, we have this great big parking lot. The event is in less than two weeks, but hey, let's throw something together and figure it out!"

"Gears and Grub was planned last-minute as a response to community demand," explains Smicker. "There was no place for local vendors to go during the biggest tourist weekend of the year. We figured, we have this great big parking lot. The event is in less than two weeks, but hey, let's throw something together and figure it out!"

Calling it "the food court" of the tourist weekend, Smicker goes on to explain that this year, more time to plan the event meant expansion.

"This year, we've expanded to include more local vendors and businesses. There's going to be local bands and local breweries, in addition to lots of family-friendly stuff."

Gears and Grub is perfect for those who may not be ready (or old enough) to handle the commotion that comes along with Roar on the Shore (although Smicker explains that the West Erie Plaza truly encourages everyone to explore every aspect of the weekend).

"Plus, the event is dog-friendly!" she adds.

For Smicker, the event is a win-win; it actively engages the community and provides them with an entertainment option unlike any other that weekend, but it also gives people a chance to mingle with local businesses, artists, and above all, the West Erie Plaza. For this opportunity, many vendors are grateful.

"We are excited to be a part of the Gears and Grub event again this year," says Keith Groff of Brooklyn Pizza. "It showcases the local food and other vendors that cannot be a part of the Roar on the Shore event. It also provides a more family-friendly environment where parents can bring little ones and not have to deal with the large crowds of downtown."

Brooklyn Pizza is the first of several who offered insight on why Gears and Grub is an important new tradition for the Erie community.

"Gears and Grub is exciting to me because it stemmed from the heart of the Erie Community," says Tim Grow of The Que Abides, a beloved Big Lebowski-themed food truck. "When the people of Erie found out that our local vendors could not partake and benefit from one of the biggest events the city sees all year, they were quite upset, [and] rightfully so. That's when the great people of VCG Properties stepped up and created this event that supports all that is local."

VCG Properties are the owners of the West Erie Plaza, and at this point, it's easy to gather that they've spent a lot of time and energy developing personal and reputable relationships with local businesses like The Que Abides.

"The outpouring [of] support from our neighbors and the positivity generated from Gears and Grub was palpable and, quite honestly, somewhat emotionally overwhelming," Grow continues. "The sense of community in this city makes me proud to call Erie home."

Smicker hopes that more vendors, more activities and ultimately more advertising will draw in larger crowds to the event this year. They've had more time to prepare, but Smicker explains that even the amount of attention they got last year was impressive considering how little time they had to advertise.

"Each of our vendors sold out every day, and some sold out twice," Smicker says. The attention certainly seems to be indicative of something the Erie community wants, and given the right reaction and reception, Smicker says the plan is to continue to hold this event annually.

Gears and Grub is an all ages event that will be held at the West Erie Plaza on July 13th, 14th and 15th from noon to 9 pm. Admission to this event is free and any questions, comments or concerns may be directed to the West Erie Plaza's Facebook page.