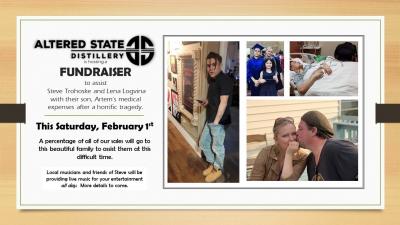 A bevy of local musicians – all gathered to help support friends Stephen Trohoske and Lena Longvina and raise funds for their son's mounting medical expenses following the Jan. 26 incident – will be featured starting at noon and continuing until 11 p.m. Saturday at Altered State Distillery, 1535 W. 8th St.

And, in addition to open direct-donation coffers, a portion of all proceeds from the day's sales at the distillery will also benefit the family, according to event organizers. A GoFundMe account has also been established in their name, and can be found here.

The event's flyer, showing the lineup and times for musicians

According to local news reports, Trohoske's and Longvina's 16-year-old – who's remained hospitalized in critical condition at UPMC Hamot in Erie – was shot in the torso by a 17-year-old friend while the two were hanging out at a Millcreek Township residence sometime around 9 p.m. Jan. 26.

The 17-year-old – who'd allegedly purchased the gun off the street just recently, according to police reports – has been charged as an adult in the case, and reportedly remains jailed in lieu of $75,000 bond on felony and misdemeanor charges including aggravated assault, carrying a firearm without a license, receiving stolen property, simple assault, and reckless endangerment.