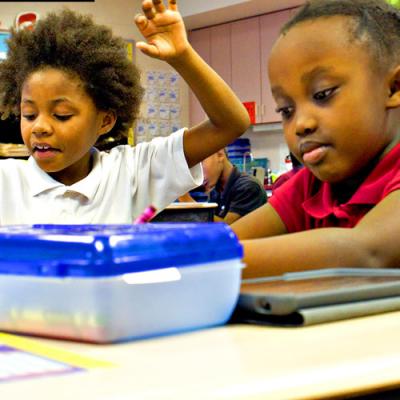 This fall Erie's Public Schools rolled out its pilot of the community schools strategy. More than $1.5 million in seed funding was provided through the collaborative efforts of the Erie Community Foundation, the Erie County Gaming Revenue Authority, the Susan Hirt Hagen Fund for Transformational Philanthropy, and the United Way, with additional funds coming from the district and its corporate partners.

The community school strategy is predicated upon the belief that public education is the foundation of a democratic society, and this year five schools were selected to be matched with corporate partners, which will help fund the initiative, and community or "lead" partners that will implement the community schools strategy in select schools.

Edison Elementary School, Emerson-Gridley Elementary School, McKinley Elementary School, Pfeiffer-Burleigh School, and Wayne School were selected last summer through a request for proposals from each of Erie's 18 public elementary and middle schools. The program is estimated to cost approximately $100,000 per school, per year. Each school will feature comprehensive support of the students and the community in which the school is located. This involves an adaptive curriculum that is community centered, including service opportunities and experiential learning in the community to strengthen the bond between people and place; co-located health services, mental health services, and family support agencies; as well as adult education and workforce training.

On a regular basis, we hear anecdotal evidence of teachers going well beyond their job descriptions to tend to the personal needs of students who might come to school each day – if they come to school each day – from difficult home lives. Every day, scores of students come to school hungry, some not having eaten since the previous day's lunch period; or they leave school one afternoon only to find themselves homeless because their parents or caretakers have been evicted from their apartments during the school day; or they are among the many children who are exposed to crime, violence, and blight in their neighborhoods and in their lives.

Stories such as these are silent travelers that emigrate into each classroom and each social interaction, impacting the quality of both while placing student and teacher behind on their agenda, many times well before the school day begins.

The community school strategy has successfully mitigated the out-of-school impediments to learning in both urban and rural communities across the country. In Ohio, the Cincinnati School District was in peril. Between 1975 and 2010, urban sprawl reduced the district's school-aged population from 90,000 to just 28,000 students. The tax base was comparatively nonexistent. In 1999, the district initiated a public referendum to repair crumbling school infrastructure. It failed. Only 19 percent of the voting population in Cincinnati had school-aged children and only half of those went to public schools. Cincinnati public schools were on the verge of collapse.

Recognizing that the community at large needed health and social services as well as community programming for both children and adults, the Cincinnati School District declared that all of its public schools would become Community Learning Centers, where medical clinics provide primary health services with co-located mental health services. They offer exercise classes and book clubs; plus college and career counseling in addition to tutoring services that link the district's accelerated learning programs. Since 2006, the results of these programs is staggering.

In 2006, the district faced an achievement gap nearing 15 percent, a graduation rate of 51 percent, and 14 of the city's 55 schools were in a state of academic emergency. By 2015, 43 of the district's 55 schools had been designated Community Learning Centers and the achievement gap dropped to 4 percent, the graduation rate climbed to 82 percent, and only three schools remained in a state of academic emergency. In 2010, the Cincinnati School District was named the top urban school district in the state of Ohio.

In the 1980s, Kentucky was widely considered to have the worst educational system in America. It ranked 43rd in the nation for per-pupil education funding with local funding for some districts a paltry $80 per student. It also ranked 49th in post-high school college enrollment, and last in the U.S. for adults with a high school diploma. In a landmark Kentucky Supreme Court case, Rose v. Council for Better Education (1989), the Court ruled that the state's general assembly had failed to provide "an efficient system of common education." In his decision on behalf of the Court, Chief Justice Robert F. Stephens wrote, "Lest there be any doubt, the result of our decision is that Kentucky's entire system of common schools is unconstitutional. There is no allegation that only part of the common school system is invalid, and we find no such circumstance … This decision covers the creation of local school districts, school boards, and the Kentucky Department of Education to the Minimum Foundation Program and Power Equalization Program. It covers school construction and maintenance, teacher certification – the whole gamut of the common school system in Kentucky."

In response to this decision, the General Assembly passed the Kentucky Education Reform Act (1990) creating a statewide system of community schools, which included family resource centers to provide before- and after-school childcare, family literacy services, as well as health services and referrals; and youth service centers that, in addition to providing health and social services, offered career and college counseling, implemented a summer jobs program, and administered substance abuse programs as well as family crisis counseling. Today, the state's education system is ranked 27th in the nation. It was 48th nationwide less than two decades ago. It has the ninth highest graduation rate in the country and the lowest achievement gap between rich and poor students in the nation.

Cincinnati, Ohio, and Kentucky each share analogous traits with Erie, Pennsylvania and our Commonwealth, respectively. Erie has experienced a steady decline in school-aged population over the past several decades as a result of urban sprawl; and it, too, has struggled to reconcile the effects of a diminishing tax base and the absence of an equitable state funding formula as it deals with aging infrastructure and growing populations of English language learners and special needs students among its abundance of students living in poverty.

It is, in many ways, a return to the educational values upon which public education in the United States was founded.

There are legislative agendas emanating from the governor's office and the legislature, but given the current political climate, nationally and in Pennsylvania, there is no guarantee of educational reform generally, or specific economic relief targeted for Erie's Public Schools.

The community schools strategy provides the city's teachers and administrators with an agency that has not been part of the public school experience for nearly half a century. It is, in many ways, a return to the educational and traditional values upon which public education in the United States was founded.

Jim Wertz is the author of the fourth Jefferson Essay, "The Past, Present, and Future of Public Education in Erie," which will be published later this month by the Jefferson Educational Society and will be available at jeserie.org. He can be reached at jWertz@ErieReader.com, and you can follow him on Twitter @jim_wertz.