CONNECT for the Community 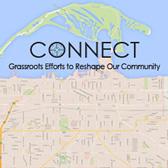 Say east side to someone in Erie and certain images, phrases, and descriptions rush to mind. "Opportunity," "potential," and "development" are chief amongst the responses for the folks behind a recently installed exhibition at the Erie Art Museum.

Spread corner to corner (even with details sprawled out on the floor), CONNECT: Grassroots Efforts to Reshape Our Community currently occupies the Hagen and Katzwinkel Galleries. The exhibit's description is stirring, yet poignant and worthy of a slow, careful read:

The bones of this city are still beautiful, but major arteries have been severed. Violence and hopelessness prevail in communities cut off from financial, educational, environmental, and aesthetic resources. This exhibit examines the health of the whole city through several visionary projects that seek to diagnose its ailments, proposing a treatment plan that takes into consideration the people most afflicted. Let's come together – connect, communicate, and collaborate on a solution to make Erie great.

CONNECT will be up until Jan. 10, 2016. The last CONNECT for the Community Event, however, where attendees will look at the projects and plans in this exhibit and then gather for a facilitated discussion on how they connect to the Erie community, will be held at the Erie Art Museum on Sunday, Nov. 15 at 2 p.m.

There, Chris Magoc, a Mercyhurst University history professor, will join with the Sisters of St. Joseph East to ignite dialogue through the architectural history of east Erie.

Erie politicians are weighing in, too. The "Lake Erie Quadrangle" proposed by County Executive Kathy Dahlkemper explores the establishment of a federally designated marine sanctuary to protect the more than one-hundred shipwrecks that populate Presque Isle Bay and Lake Erie, snaking along New York, Pennsylvania, and Ohio.

The City-County collaborative energy between architect and City Councilman Dave Brennan and County Councilman Jay Breneman aims to convert the former 19th Street railroad tracks into a green-space to serve as a walkway, a bikeway, and an overall welcome alternative to the overgrown and neglected brush blighting it now.

The City-County collaborative energy between architect and City Councilman Dave Brennan and County Councilman Jay Breneman aims to convert the former 19th Street railroad tracks into a green-space to serve as a walkway, a bikeway, and an overall welcome alternative to the overgrown and neglected brush blighting it now.

Also on the east side, the East Avenue Task Force, spearheaded by City Councilman Bob Merski, targets – you guessed it – East Avenue, to revitalize an area wracked by gun crimes.

There's a 24-hour youth center concept (Steve DeAngelo Arrington Community Center, championed by City Councilwoman Sonya Arrington); a novel aquaponics facility to be built at the Joyce A. Savocchio Business Park (headed by the Urban Erie Community Development Corporation's Gary Horton); and a Civitas-led initiative to steer the future of the McBride Viaduct from demolition to repurposing.

The Jefferson Alliance for Community Progress illustrates a vision to connect the east side to Presque Isle with an underground tunnel, while Bike Erie seeks to expand the existing path hugging the Bayfront Parkway to a twenty-mile urban trail. And Ross Schlemmer and Kim Powell showcase narrative-based artworks that map out how Erie sees its reflection in the mirror of art.

In all, there's a lot to see – and even more to consider. What's greater yet is the opportunity for interaction. After all, productive, open dialogue spurred by art at a community meeting that's free and open to the public seems like a damned fine way to spend a Sunday afternoon, and chart out the future of a region still ripe with dreamers and doers.