Lisa Austin, Professor of Sculpture and Three-Dimensional Design at Edinboro University of Pennsylvania, and co-founder of Civitas reviews "A Second Look: Architecture of Erie," a photography show at Mercyhurst University. 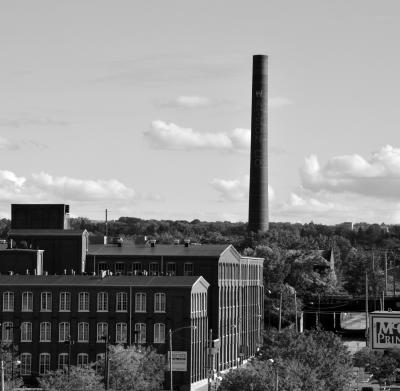 Michael Bumbera's photograph, "Gateway to Hollywood," documents the Warner Theatre's main entrance. His photograph and title led me to consider how differently our grandparents experienced Erie.

The next Saturday night, some of us will pull on our Walmart jeans, a T-shirt, and coat and drive over to a friend's and honk the horn. After riding on I-79, we'll get off on Kearsarge, and then search for a open parking spot in the Peach Street lot. Next we'll hike between cars, trying not to get dirt on our coats. When we arrive at the outer lobby of the Tinseltown multiplex, we'll pick up the tickets (purchased online) for one of the dozen movies playing.

Flashback to 1949: A young man puts on a Boston Store suit and tie from Isaac Baker. He walks to his meet his sweetheart (who is wearing a new frock from Trask's.) Together they take the bus to State Street and walk down to the Warner Theater. While they wait in line, they check out the other moviegoers, say hello to friends, and look at movie posters in polished bronze displays. The feature, "That Midnight Kiss," (starring tenor Mario Lanza) combines music and romance. Surrounded by a well-dressed crowd, the gleaming ticket booth is the center of attention. The ticket vendor, sharp in his bowtie, is the first to welcome the couple; once inside, ushers in suits and white gloves direct the pair to their seats.

Bumbera's photo of the Warner focuses on the theater's welcoming overhang and ornate ticket booth. His evocative title, "Gateway to Hollywood," recalls a mid-century Saturday night in Erie when the community would be entertained by the big screen while surrounded by great architecture. Today's suburban Upper Peach complex offers hi-tech features and a great variety of films – but the elegance is missing.

Other images by Bumbera feature titles directing our perception. The West 26th Street's Sigsbee Reservoir's watchman's home is cutely introduced as the Gingerbread House. Bumbera's photo of Erie's commercial landscape (used on the gallery announcement) includes Watson Smokestack, McCarty Printing, and the former Lovell Manufacturing complex. His sarcastic title gives a kind of hope for the city: "But, I'm Not Dead Yet."

Another downtown image, "Kraus's Department Store" is by Lawrence Brown, an Edinboro University of Pennsylvania alumnus, freelancer, and technical expert at Van Tuil's. Brown documents the Kraus's worn charm amidst its Parade Street neighbors. Six smallish, square photographs offer viewers a tour of down-at-the-heels buildings still sporting aging business signs on Erie's original main street. Brown's minimalist "Pizza" shop is a counterpoint to his image of the elaborate "Coach and Four." The sign on this building uses an elegant font and is illustrated with a carriage and four horses (a 19th-century symbol of royal luxury.) Brown's images mourn the heyday of Parade Street.

One of Lindvay's former photography professors at Edinboro, Suzanne Winterberger, created a series on Social Clubs that reveal Erie's pride of heritage: Pulaski, Huzars, and the Polish Falcons Nest 123. Others advertise the activities of those years when playing was a non-digital event: Kings Rook Club (chess), Erie Pinochle Club (card game) and a gymnastic organization – the East Erie Turners. One club managed to combine heritage and hobby – the Polish Sharpshooters. In Winterberger's photos, these buildings are battened down, closed off, a bit mysterious. Most windows are blocked in and exterior masonry is hidden in aluminum siding. Lucky for us that the Polish Falcons still leave bare their fancy brickwork so we may admire the skilled mason who ornamented each window opening and crenellated the cornice overhang.

Another Edinboro photography professor, Denise Keim, offers photos that offer a grim reminder of the erasure of Erie's building stock. Keim presents "before" and "after" shots of a recently bulldozed Cold Storage site. For almost a century, the massive Cold Storage building dominated a stretch of railroad tracks west of Parade Street ("German and East 14th, 2011").

Steve McGarvey, a local investor and visionary, once owned Cold Storage and planned to take advantage of the building's knockout views of the city and the lake. But McGarvey died too young and Cold Storage is history now – along with a host of other viable buildings demolished at a reported cost of $5 million ("German and East 14th, 2012"). EMTA is bulldozing everything from French to Parade just north of the railroad tracks. EMTA plans to close the Division Street railroad underpass that serves school children, moms with strollers, seniors with canes, and folks biking to work. EMTA says they'll bus kids to school, but EMTA is missing the point – the closing of Division will make life harder for people who are already struggling. An unelected, impenetrable monoculture, the EMTA makes decisions without understanding the complex nature of city life. Denise Keim's stark images capture residents' powerlessness over their environment.

Scattered around the region are one story, quickly constructed warehouses – charmless, disposable pole barns. Many are vacant. Tom Eells finds his way around to the back of these sites and takes pictures. He composes the forlorn spaces with a strange and majestic, deadpan composition straight from Grant Wood's "American Gothic." (Remember the elderly farmer and his middle-aged daughter standing glumly in front of their barn?) Extending beyond the left and right edges of each photograph, the buildings sit impassively beneath a changing sky. Beautiful-ugly landscapes fill the foreground (water pooled on asphalt, snow sprinkled over weeds, or a diagonal of bright yellow parking lines.) The uninspired structures are redeemed in Eells' luminously serene prints.

Gary Cardot, the curator of this impressive show is a professor of photography and art history at Mercyhurst University. Cardot contributed his own digitally-altered and enlarged versions of historic Erie postcards. Many of the buildings he includes survive in the city today: the Warner Theatre, Federal Courthouse, Watson-Curtze Mansion, and St. Patrick R.C. Church. Studying these cherished Erie landmarks is like finding a grade-school picture of your grandmother: as you look, you can feel the century turn over. These souvenir postcards cultivated Erie's community pride. Why aren't we still constructing buildings we can boast about?

While this show features some of the region's strongest photographers, it is more than a themed exhibit. "A Second Look: Architecture of Erie," is trying to get our attention and warm us up for some tough questions. How can we discourage surface parking lots and suburban developments in the city? How can we attract investment and encourage small businesses? Shouldn't we be creating a No-Growth-Line? (Instead of building subdivisions and business parks on farmland, we could be catalyzing redevelopment of the city and inner suburbs while encouraging stewardship of open land.) Shouldn't the 200,000 people living in the city of Erie, the inner suburbs of Millcreek, Lawrence Park, Wesleyville, and the partially rural outer suburbs of Harborcreek, Summit, and Fairview be working together? Who will lead us to form a regional government?

You can help. Support the reuse of existing buildings and good urban design with Preservation Erie (www.ErieCDP.org). Help maintain open spaces with the Lake Erie Regional Conservancy (www.Lerc-Erie.org) Work on transportation advocacy with All Aboard Erie (www.AllAboardErie.com). Help with economic development by promoting start up businesses at Innovation Erie (www.InnovationErie.net). Participate in a conversation about regional planning with Civitas at www.JohnNolenProject.com. Together we can make Greater Erie as vital as the place enjoyed by "our" grandparents.

"A Second Look: Architecture of Erie" continues through January 20 at the Cummings Gallery at the Mary D'Angelo Performing Arts Center at Mercyhurst University, 501 E. 38th St. Gallery hours are Monday through Friday: 9 a.m. to 4 p.m.; Saturday and Sunday: 2 to 5 p.m. For more information on the gallery and exhibition, call 824.2092.