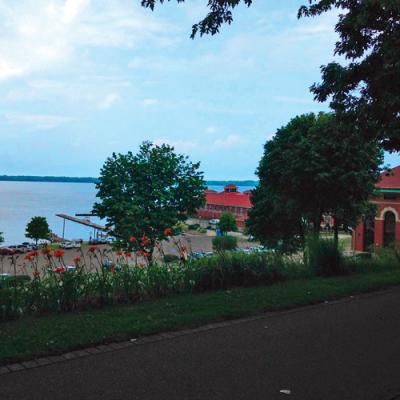 On July 24th, 80 people gathered at Presque Isle to celebrate the life of Bill Welch (1940-2016), one of Erie's most devoted environmental advocates.

After a few brief remembrances about Welch's volunteer work in Erie, one longtime friend commented that Welch "drove people crazy [because] he would not stay on subject." The mourners laughed in appreciative acknowledgement of this truth.

To Welch's way of thinking, each environmental issue was connected, and he wanted to explain it all so that listeners would be moved to take action. Hearing him speak was always educational, but it could be overwhelming.

Welch consistently noticed whatever was going on at the water's edge, and inland. He asked questions, investigated, and shared his findings with the local, regional, and national organizations with which he was affiliated.

Welch's commitment spanned decades. He served on the 1985 steering committee for a conference on Presque Isle and the Bayfront. During those proceedings, Thomas B. Hagen (who was then chairing Mayor Tullio's taskforce studying how to develop the bayfront), praised John Nolen's visionary 1913 plan for the city. While Hagen urged the transformation of Erie's "spectacular natural harbor," he urged a constant "concern for the fragile waterfront environment."

Bill Welch always provided that concern. At the "citizens to be heard" portions of Erie City Council meetings, Welch forcefully shared his observations and research. He boldly chastised elected leaders, beginning with his familiar phrase: "I can't believe you're not doing anything about …"

Welch's frustrations never kept him from trying again. At his memorial service, he was described as Erie's "canary in the coal mine," warning lawmakers, residents, and even reporters about issues 10 or 20 years before they became well understood by leaders.

But Welch's frustrations never kept him from trying again. At his memorial service, he was described as Erie's "canary in the coal mine," warning lawmakers, residents, and even reporters about issues 10 or 20 years before they became well understood by leaders. One former reporter for the Erie Times-News called Welch Erie's "conscience on environmental issues," and noted that Welch provided leads resulting in "hundreds of stories" in the paper.

After the service on the East Pier, I headed back to the city. As Erie's steeples and smokestacks came into view, I was reminded of the work of another devoted volunteer, John Claridge (1926-2015).

Years ago, Claridge served as director of the Erie County Historical Society. A quiet advocate for Erie's built environment – homes and churches; commercial, industrial, and civic structures; public spaces – Claridge somberly chronicled the demolition of historic properties across the county.

In his 1991 survey, "Lost Erie: The Vanished Heritage of City & County," Claridge commented that "the conveniences of the modern age, particularly those spawned by the automobile, are rapidly erasing much of the diversity and consequently the sense of identity that is immediately transmitted through readily recognizable objects."

Concerned by the lack of protection for Erie's "readily recognizable objects" – even buildings listed on the National Register – Claridge met with concerned residents to encourage the formation of a preservation group. In addition to promoting preservation, the new group proposed public education about regional planning, urban design, and zoning through lectures, workshops, design charrettes, tours, an inventory of historic properties, the proposed establishment of new historic districts, and the proposed creation of a demolition review board to review applications to tear down properties more than 50 years old. Having achieved some of these goals, Preservation Erie will be celebrating its tenth anniversary next year.

It's clear that Bill Welch's environmental work and John Claridge's devotion to preservation were two sides of the same "green" coin. Both environmentalists and preservationists are needed to support a beautiful, sustainable, and thriving region in Greater Erie.

In Historic Preservation & Environmental Conservation, Jaye MacAskill wrote that while "growing environmental awareness has convinced many people to recycle" there is little understanding that "all their efforts … are negated with the demolition of just one … historic building." With every demolition "we lose … the structure" and the "total amount of human and mechanical energy that originally went into its construction." Further, demolitions always "release toxins and other pollutants directly into the air, water, and soil" and "produce massive amounts of debris" that must be moved to landfills in gas-guzzling dump trucks.

To be truly "green," we must protect open land, farmland, and forested areas. We must discourage the construction of new roads and power, water, and sewer lines in favor of reinvesting in already developed areas and adaptively reusing existing structures.

Everett Edward Hale, the 19th century American Unitarian minister, famously said: "I cannot do everything, but I can do something."

Bill Welch and John Claridge could not do everything that needed to be done in Erie, but they did something. Will you?